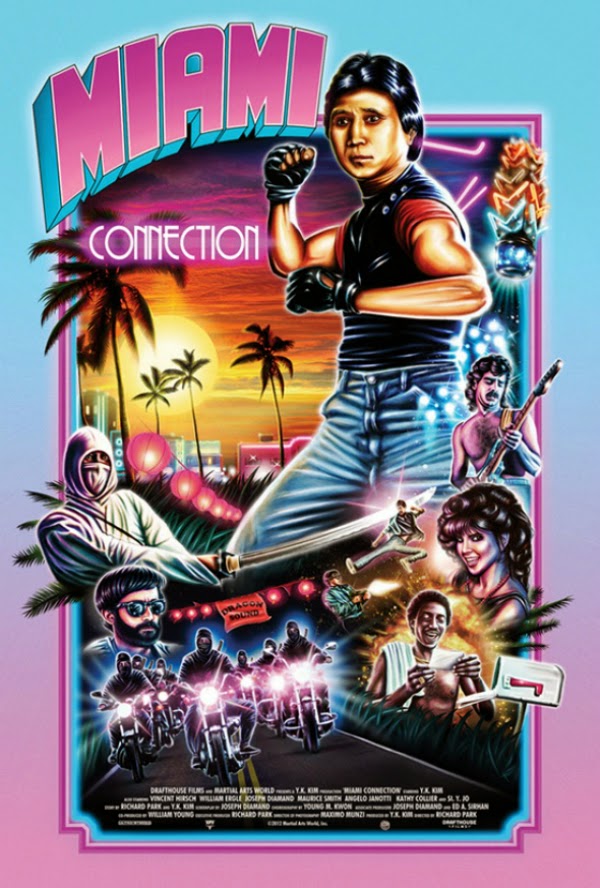 Once upon a time in the 1980's, which is how all great stories begin of course, there was a silly b-grade movie made called Miami Connection. First off, producer and star Y.K. Kim had trouble even distributing it and when he finally found a small distributor to do the job, the film flopped and he nearly went bankrupt. Since then it only had the tiniest of cult followings. In 2009 that all changed when someone made a blind eBay bid on the 35mm print for $50, only to win. When he watched what movie he got, he contacted the program director at Drafthouse Films, who wanted to re-release the film. At first Y.K. Kim thought they were joking and ignored their calls, but apparently after much persuasion he gave them the rights to distribute and Miami Connection was rediscovered. Only now, the world was ready for it.

It follows a whole group of friends with such creative names like Jim, Jack, John and... Mark (Oh, hi Mark!) who are all students at a local Miami university as well as synth-rockers by night, who have just started playing gigs as a night club. But they're not just any synth-rockers... they also know Tae Kwon Do. They get on the bad side of a few local gangs, who join forces to try and kill the band through a series of battles where the bad guys take on the good guys one at a time... because you know, if they all attacked at once there would be no sport in that and the movie wouldn't be very long. Oh yeah, and there is something about a cocaine smuggling operation and a group of ninjas who are somehow affiliated with these gangs. Also, did you know that violence is bad?

So, first, let's discuss why this movie flopped in the 80's. Nowadays, b-movie fans watch this and wonder how anyone could not love it. But part of the charm of the movie now is the retro flare, complete with curly mullets, big moustaches, and neon clothing. Even in the better films of that decade, those things stand out as kind of funny to us, but at the time it was all common place and didn't even register to the public as something ridiculous. The 80's was already kind of a joke, so when Miami Connection came out and was also a joke, the public wasn't in on it. It would be too much like laughing at themselves, which not everyone can do. The two featured songs “Friends” and “Against the Ninja” were not outstanding enough to be anything more than fairly bad rock songs, where now they are almost an embodiment of a cheesy genre that's since been put out to pasture. There was no way that this movie would work for people back then. And for those reasons, there is no way it wouldn't work for a modern audience. It had to have been made then in order for it to be a hit now. Such a bizarre and unique set of circumstances made it what it is today, but it's a very bizarre and unique film.

It's a very precarious line that Miami Connection balances on. Often with b-grade movies, you have to get through a lot of boring and uneventful material to reach a few entertaining portions. To some those parts are worth the wait, to others, not so much. Miami Connection is truly something special, being more entertaining than not the majority of the time. And it's not that it's a good movie, because it's not. It is remarkable that it is incompetent on as many levels as it is. Director Richard Park and Y.K. Kim prove time and time again that they have no idea how to make a movie. But they do get all of the right things wrong for it to be entertaining. For example, all though the movie it is really poorly edited. Scenes just kind of jump ship before they're finished and jarringly jump into another scene. There are enough of these that it's hilarious and becomes a joke in and of itself. In fact, it could work in an alternate cut if there were transitions between the scenes just like the 1960's Batman show or the original Transformers cartoon. Trust me, I can see it right now.

Some who compare it with other so-bad-it's-good movies such as The Room, Tommy Wiseau's 2003 mess of a film, should know that this beats many of its peers. Funny as it was, I wouldn't be able to stand watching The Room from start to finish by myself and it really feels like an overly expensive ego trip for Wiseau. Miami Connection feels more honest and pure hearted. God bless them, they were trying and wanted to create a movie that would unite a generation. Foolish as the film is, they at least had a concept of what people wanted to see when going to the movies. Motorcycles? Ninjas? Rock shows? Hell yes please! It's got the right ingredients, but it's like a toddler was the head chef... though somehow the stew still came out delicious. It's a little thinner than it should be and you don't know what every lump is, but still tastes good to the tongue.

By the way, Y.K. Kim can't act at all. He can fight, and the footage slows down to let us know, as if we could miss it, but you can hardly understand a word he's saying. Not only that, but even if you get past the way he talks, he can't even pretend to play the guitar. For a movie about a bunch of college kids in a band, they sure didn't study much about how to play their instruments. Only a couple of them actually can play as the two main songs were written in part by two of the actors, including Mr. Mullet and Moustache himself Angelo Janotti. Most of the other actors are okay at their best and hilarious at their worst.

It's a miracle that this movie came back to see the light of day, but I am grateful that it has. It might be the best time I'll have in theatres this year. Yes, it's a bad movie, but it is also an amazing one. It's unfathomable how well it defies logic and comprehension but still keeps the audience involved, though I suppose it's in an ironic sort of way. I don't know, what's charming about it is that it didn't feel like I was laughing at the movie, but I was laughing with it. I don't know how that works because it's very clear that everyone involved had no idea that they were making a bad movie, but I suppose it's like having an awkward friend who says stupid things at inconvenient times, but you really respect him anyway and want to keep him around. Perhaps I'm getting lost in the metaphor.

Miami Connection flopped in the 80's because the world wasn't ready for it. I can safely say that we're ready now and it's time that the film got the credit and love that it deserves... like a crazy brother that you didn't know you had that's been locked in the looney bin for 25 years. There I go with those metaphors again...