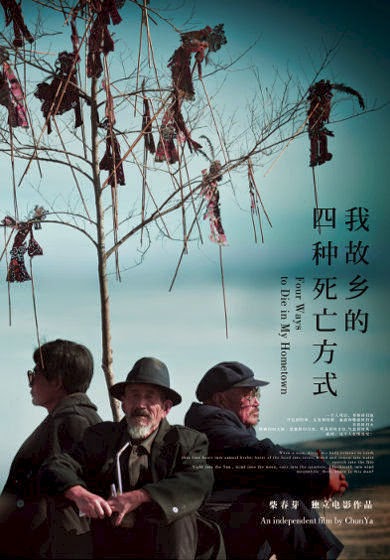 The first show I caught at the Vancouver International Film Festival was this Chinese film, Four Ways to Die in My Hometown. To be honest, that title sounds more like the name of a black comedy than a semi-documentary cultural drama, but I accept that there are cultural differences and not everyone shares my sense of humour. I was at the second screening of the film, if I recall correctly, and I was fortunate that the writer and director Chai Chunya was there for a Q&A after the show. Admittedly, it helped clear up some of the ideas behind the film and in understanding the film making process better, I appreciated the film more because of it. I know that it shouldn't be a prerequisite for the director to explain things in order for a film to be more enjoyable, but I need to acknowledge that this was never intended to be a mainstream film and it's a culture that is so foreign to me that it's only understandable that I would be a little confused.

Now, to clear up your confusion, I should talk on what the film is actually about. Even still, it's not an easy question to answer as the film is divided into four sections; the four ways to die are the four elements: earth, wind, fire, and water. The first story follows Ga Gui, a young woman who left her home village to move to the big city in order to pursue an education, something which a lot of the young people do. She returns home to learn that her father is quite old and sick and has been preparing to die by sleeping in a makeshift coffin. There is another story about shadow puppet makers and someone stealing and selling some guy's puppets and such. In all honesty, the story isn't really what's to focus on in this film anyway.

Chai Chunya described this film as his poem to his old village. And I feel in that regard he succeeded. Four Ways to Die in my Hometown is visually stunning, capturing rural landscapes and ancient architecture. But it definitely doesn't feel like film prose, in that the narrative is presented more for visual and surreal beauty rather than a cohesive narrative. As such, I reacted to the film as I do a lot of poetry; I like it but I don't really understand it. I appreciated the aesthetics, the motions, and the craftsmanship put into the movie, but as far as knowing what I could take away from it, I'm a little stumped. I don't feel like I got a whole story and I didn't really get an overall lesson. But I guess that wasn't the point anyway.

Rather than using trained actors he recruited people that he grew up around to help flesh out the honesty he wanted to show. And I think that was a good move for his vision of the movie. Because it doesn't really work as a story, we have to take it as a cultural experience and who better to guide us through that than the actual natives of the land? Chunya expresses sadness for the ancient traditions and lifestyles that will be lost in his home town with the new generation of young people who are all but abandoning it. So, this film functions almost as a time capsule, a portrait of a way of life soon to be lost.

And it plays out somewhat like a folk tale, perhaps expressing that what happens in the town will one day be little more than a story. There are fictional elements within. Ga Gui's family owns a camel, which is apparently just as exotic there are it is here so it's an unusual decision which gives it a folk tale kind of feel. Also, elements like a man staying in a coffin in his final days, and the puppeteers doing one last show before their stage bursts into flames, all make it seem strangely fictional. And of course it is, but it leaves one to wonder where fact and fiction separate. I suppose I'll never know.

In the end, I'm glad I saw Four Ways to Die in My Hometown if not simply because it is one of the more unique experiences I've had in the theatre in recent years. Would I watch it again? I'll probably pass. I respect the movie and Chai Chunya's willingness to use film as an artistic medium, but it doesn't quite satisfy my desire for a well told story. I'm glad films like this exist and that they're out there for people to see, and I don't even mind watching them every once in a while.