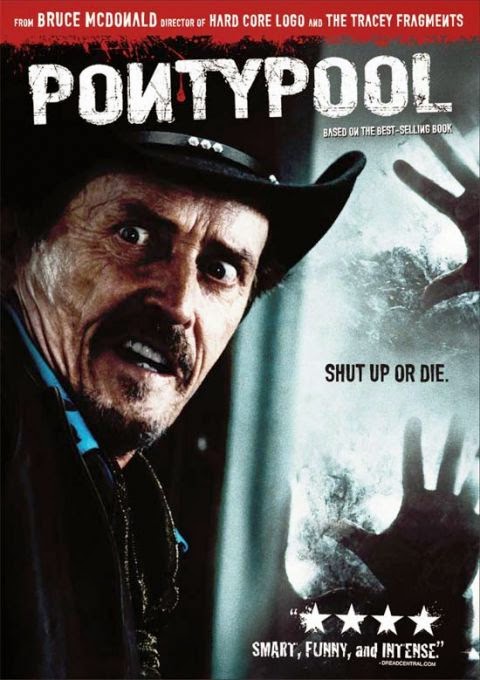 I like zombie movies. There are endless possibilities with zombie films and I don't think that many people acknowledge this. At first glance, many might see zombie films as just an excuse to have blood splatter on screen, while capitalizing on a well established fan base. If you put zombies in it, they will come. This can sometimes be true, but the more successful zombie films tend to focus more on the psychological aspect of it all. With these brainless, flesh eating characters there is potential for horror, action and even comedy, while their human costars are also given opportunities to reveal both the darkest and lightest parts of human nature. Often people's true characters are what come through in survival situations. The “zombie movie” has almost become a genre of its own since George A Romero made Night of the Living Dead back in the 60's. So, now the question is... what can people still do that is original in this zombie genre? Canadian made Pontypool has an answer for you.

The story follows Grant Mazzy (Stephen McHattie), an ex-shock jock radio announcer from a city, who now lives in the small town of Pontypool, Ontario, where he announces for a small local radio station. During his normal early morning routine, something strange starts to turn up as their weatherman reports about strange swarms of people surrounding the lab of the local doctor Mendez (Hrant Alianak). He reports about multiple deaths, but before Grant and the station get any clear answers, their weatherman is cut off and they're left trying to dig up news on the event all by themselves.

What makes Pontypool different from the majority of zombie films out there is the amount of restraint it exercises. Suspense and fear come from what we don't know. Movies like the Saw franchise rely almost entirely on gore to provide its thrills, but rarely down it actually provide the real thrills that the best horror films have been able to produce. I found myself quite invested in the characters of Pontypool. They are smart to keep the cast small, focusing on Mazzy, Sydney Briar (Lisa Houle), the station manager, Laurel-Ann (Georgina Reilly), the technical assistant, and Ken the weatherman (Rick Roberts), who we never actually see. And that is part of why the movie works. We get to know the important characters and we know that they are in danger, probably before they realize it themselves. But the danger, which is of course a zombie swarm, is completely unseen for much of the movie. We get a description and even small audio cues. The audience clues in because, well, we know what kind of movie we're watching. But it's fascinating watching the characters try to piece together what's going on with the limited amount of evidence presented.

The actors are great, particularly Stephen McHattie, who looks and sounds perfect in his morning radio DJ role. As his performance progresses through the movie, we see him losing his grip on the situation as it clearly becomes something out of a horror movie (go figure) rather than the mundane small town life that he was getting used to. He keeps a strong screen presence, even as Mazzy loses control over the situation, he maintains control over himself. Lisa Houle and Georgina Reilly also do a great job in their respective roles and prove to be strong female characters, helping lead the story rather than just tagging along.

The atmosphere is dark and mysterious, and like many good zombie films, it is in a contained space, focusing entirely on how the zombie outbreak affects that area. We only get glimpses of the bigger picture, but again, the audience is only allowed as much information as the characters get. That's where the psychological aspect comes into play. We watch the humanity in the situation, not the attacks and the violence. The audience and the characters are in a place where all they can do is wait and guess as their perception of what is possible is challenged.

So, for a good portion of the film I was very involved and was almost convinced that it was one of the best zombie movies I had seen. And at that point we were only just beginning to see any zombies, which I found to be an upside. Not unlike the shark from Jaws, the monsters in the film are left to our imagination for most of the movie. This is when they're most terrifying. And the few scenes when they are present are fairly suspenseful also. However, despite a very solid first two acts, the film's final act is unfortunately a let down.

Now, the movie is an adaptation of a novel called Pontypool Changes Everything. I am not familiar with it, but I don't imagine that the movie strays overly far away from it simply because the screenplay was adapted by the novel's original author Tony Burgess. And if it does stray away, it is in such a way that the author approves of, obviously. I have to confess though, that I don't really enjoy this take on zombies, particularly how the virus is transmitted. I can see and to some degree appreciate what it is that they were trying to do, and also again, I appreciate that it's something different for the zombie genre, but the problem is that it really doesn't make a whole lot of sense. Perhaps in the book it is more clearly explained, but in the movie it just seems a bit underdeveloped and kind of silly. I don't really want to reveal any more than that though.

Also, I'm disappointed that the third act loses much of the suspense that the film was so masterfully crafting up until that point. The resolution seems to lack focus and ultimately doesn't live up to the promise of the premise. It's difficult to explain why without ruining the film for you, but I just think that with zombie films, there are expectations as to how a climax is supposed to play out. It's not so much a formula as much as it is just the logical way that you capitalize on the tension that has been already set up.

That being said, someone else might find the final act and explanation to the crisis fascinating. Maybe I'm just too much of a zombie purest and wish that the laws of Romero be upheld. At the very least I have to credit the story for being a unique take on the genre, even if I wasn't entirely pleased myself. And I would say that the movie is well worth watching if only for the excellent start. It really was shaping up to be an incredible film, and it's a shame that it didn't pan out as well as I hoped. Nevertheless, Pontypool is an admirable entry into the zombie genre and hopefully it will find and audience that appreciates it.