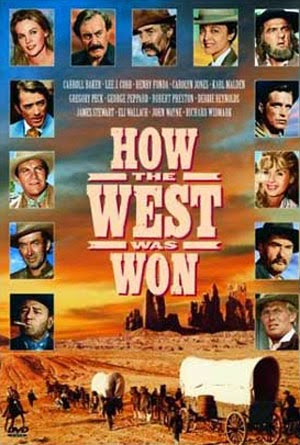 I first took interest in How The West Was Won when I travelled to Seattle and watched a film at their single screen Cinerama theatre. It was a beautiful theatre with a giant auditorium and a lot of history behind it. It is one of only three theatres that is still capable of playing the Cinerama format, but not too many movies were made with that technology. In the lobby the were posters of the various films that were made that way and the one that I had heard of was How The West Was Won. So, finally I've gotten around to watching it and it seemed like a good time to share my thoughts on the film.

First, let me explain the Cinerama technology. Normally, things like this don't matter too much to me, but in this case, it actually affects how the movie came out because, even with digital restoration, the limitations are apparent. Used as a way to provide a wider picture in theatres, the film was recorded on three separate cameras sharing a single shutter and then, upon completion, would be projected onto a curved screen by three separate 35mm projectors that were in sync with one another. Sound pretty complicated, especially in the editing room. I imagine that with this fairly innovative technology, it would increase the budget of the films substantially, so why not put all the cards on the table? How The West Was Won boasts an impressive cast for the time, full of stars whose names are still known today, though many of them have passed away. It has names such as James Stewart, Karl Malden, Henry Fonda, and John Wayne, to name a few.

As for what the film is about, well, that's not easy to summarize. Rather than a consistent linear plot, there are several short stories with different cast members, each with a different director. There are reoccurring characters, most of whom come from the same family that the first story opened with in 1840. It follows settlers, soldiers in the American Civil War, and railway workers as they clash with the natives whose land their intruding on.

What is enjoyable about this film is how it real feels like it pulls you into that era of cinema. It begins with an overture, where there is no action on screen, just a part of the score that plays for about five minutes. This calls back to a time before movies, when stage plays would use an overture to bring the audience into the right mood before the play or opera would begin. I have admit, as a modern movie goer, looking at a single frame of a mural for that amount of time is very foreign to me. And I must confess, I'm not completely fond of it. I'm glad that cinema has evolved beyond this, but it doesn't add perspective on where movie conventions came from. Cinema spawned from the theatre, which is something that can be easy to forget in today's special effect laden blockbusters. Similarly, the film comes with an intermission, with a similarly long piece of music and mural.

Apparently Cinerama was an innovative technology at the time, but now I can see why it didn't catch on. Presentation wise, it doesn't translate overly well outside of its native medium; basically, outside of a Cinerama theatre, the flaws of it are more apparent. Because the movie was shot with three different cameras, you can actually see the differences between them so it looks like the picture is separated into three sections. While my restored version made this far less obvious, there was still a warping distortion between objects that would move from one third of the screen into another. This can be very distracting.

The story itself has a lot of interesting ideas, but I don't think it came together as well as it could have. It followed a family across generations and offered a unique look into how the west progressed through the years. It covered a chapter of history through the eyes of several characters, but unfortunately, due to this format, we don't get to know any one very well, even with its 3 hour length. Perhaps How the West Was Won would have worked better as a TV mini-series, like Roots, though I don't know if that existed when the movie was made. The stories that were there didn't really feel like they had a sense of completion, not all of them anyway. It's very episodic, and even though that's intentional, it doesn't work too well for me.

At the end of the day, it's competently made, but sadly isn't that entertaining a film. It has moments of excitement and the second half is arguably better than the first, but overall it drags and meanders which is strange for a film that has decades of story to tell. I suppose it works better as a history lesson, maybe not for what the old west was really like, but for how cinema used to be. And with the big modern day push for 3D movies, one has to wonder if our technological innovations are equally as short sited as Cinerama was. Whatever the case, it's clear that in the end, a well told story is what ultimately wins... and that's How The West Was Won about half of the time.