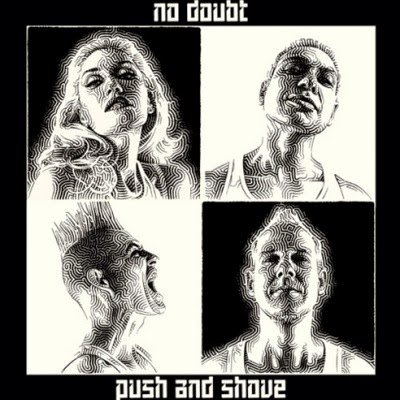 I don't know if the darn kids these days will remember, but back in the mid-ninties right into the early 2000s, there was a ska / rock outfit called No Doubt that was quite popular. When they're album Tragic Kingdom became a hit and sold millions of copies in 1995, they became a household name and major players on the pop charts. That success continued somewhat with their follow-up Return of Saturn, but they exploded even more with their 2001 album Rock Steady. No Doubt was at the top of their game and proved that they were no one trick pony. And then... they disappeared. Of course there were two pop heavy solo albums from singer Gwen Stefani that were successful, but not satisfying to most No Doubt fans.

So, where have they been these past eleven years? I guess when you make that much money, you can take as much time off as you like. And if you don't feel the creative juices flowing, then you might as well relax and let it come back naturally. But, the danger is that the 2000s were a big decade for music, not so much in output, but as far as redefining distribution goes, it's a much more hostile environment for artists, even big name ones. If anything, more so for big artists. Not everyone has survived the transition.

And by the looks of it, No Doubt was one such band; unable to adapt to the modern market. Okay, but... this is all relative of course. Their new album Push and Shove was on the pop charts in over 20 countries, but rarely in the top 10. So, by the band's standards, that only makes it a modest success. That scares record companies though. They start crying when a band that used to sell tens of millions of albums only sell a few million. But was the problem with the album really a changed market? I have no doubt (haha!) that their reunion tour a few years ago sold out like hot cakes, (which I assume sell very well). I might suggest that there is more to it than that. But before I continue, I should say that I was a bit of a No Doubt fan back in the day. Only a bit though. I must confess that Tragic Kingdom's appeal was a bit lost on me. I liked it, but perhaps the hits were a bit overplayed by the radio because I didn't love it. Return of Saturn was hit and miss for me. I did, however, really like most of Rock Steady. But my favourite album of theirs, interestingly enough, was actually their self titled, 1992 debut album, which was very raw, fun and heavily ska inspired. It's great, but it's certainly not their most well known work.

Okay, so, Push and Shove is not very good. I'm of the opinion that, if you are gone from the music industry for a long time like, say, a decade, and you want to make a big come back, you should make music that is big enough to be worthy of a big come back. And maybe that's asking too much? But think about it, if you want the public to care that you're back other than to see you play their old favourites live, you must bring them something that they want to hear, reminding them why they loved you in the first place. There is no half-assing it allowed because people will just reject your new stuff and say “well, I liked the old No Doubt better.”

Make no mistake, No Doubt have gone full pop in Push and Shove. The band that so cleverly mixed genres like reggae, hip-hop and rock and roll are basically just another pop band at this point. I suppose I can't fault them too much for going an unambitious route. They've never been a band to carry through with big concepts; they just knew how to make high energy hooks. But I can't even say much for their hooks though. After listening to most of the songs, I can't even really remember how they go. They occasionally mix in some of those genres, but the results are either underwhelming or disastrous. The title track is a complete mess, with Gwen Stefani rapping with a faux-Jamacian accent in the verses which awkwardly change into a chorus which sounds like a completely different song. It's really not a good song. They have much more success with their first single “Settle Down,” which is a bouncy pop/reggae song that does sound a little more like a No Doubt song than most of the other material on here. It's not amazing, but it is catchy.

Okay, and to be fair, not all of the songs are that bad. I actually found myself enjoying “Easy” and “Heaven” a fair bit. And also to be fair, there isn't anything as absolutely atrocious as Stefani's horrible 2005 hit “Hollaback Girl.” We should give credit where credit is due, right? What's strange though is that the album doesn't feel lazy. It's like... they were actually trying. It wasn't a rehash and it seemed to be fairly well made. The issue just comes down to the song writing. These songs are not interesting. They're not that fun and they're not that catchy and the result makes for an underwhelming experience. And not even the exuberant personality of the band can breathe life into them. It kinda makes you wonder... maybe that was it. Maybe after 2001 they just ran out of good ideas...

On an unrelated note, it appears that Gwen Stefani has found the fountain of youth. You should see her in the “Settle Down” music video. She looks incredible. She's in her 40's, has two kids, and doesn't look like she's aged since the 90's. Not too relevant, but it's impressive.