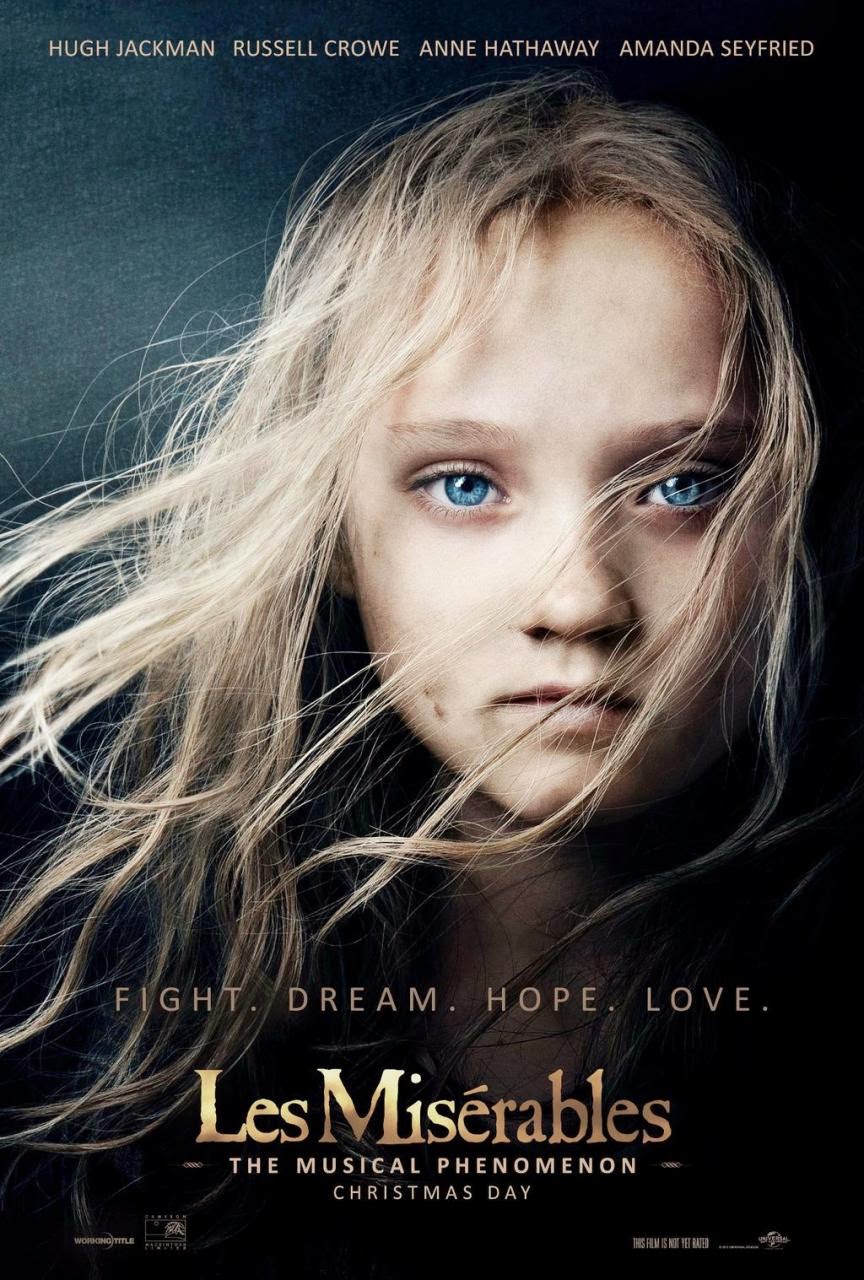 Musicals are a tricky thing; pleasing some people while alienating others. I think you need to have a certain stomach to get through them, or at least an understanding of what kind of show you're watching. To make a musical of such a delicate subject can be difficult, especially since typically musical movies are associated more with light material like Grease, Rocky Horror, and The Muppets and things of that sort. Maybe that's just me. I have to confess that I haven't seen too many big musical productions, though I did watch Ragtime when I was in grade 6. Les Misérables is one of the most famous shows from the 1980's when pop musicals were taking over Broadway, along with Cats and The Phantom of the Opera and shows of that nature. Of course, this one was of a more serious nature, dealing with the June Rebellion of France, an unsuccessful uprising against the French monarchy in 1832. But I suppose that there is a lot more to the story than that.

It opens with Jean Valjean (Hugh Jackman), a convict put on parole after serving time for stealing a loaf of bread. He is set out into the world but must report back to his parole officer every day or he will be arrested again. But as he finds himself one night about to be arrested again for stealing goods from a church, a bishop shows him kindness and tells the police that he gave Valjean the items he took. After much soul searching, and a song number in which he paces frequently, he decides to change his life and try and do good in the world. Eight years later he is an owner of a factory and the mayor of Montreuil-sur-Mer. One of his employees, Fantine (Anne Hathaway) is dismissed for reasons I don't fully understand and is sent out into the streets in desperate times while her daughter, Cosette is being taken care of two unethical bar keepers, the Thénardiers (Sasha Baron Cohen and Helena Bonam Carter). Thus, Fantine is driven into prostitution to pay for the bills and soon she falls ill. Jean Valjean seeks to help her, but first he must clear the name of a wrongly accused man who is thought to be the prisoner he once was. So, he goes to the court and tells everyone who he really is, which makes his old prison guard Javert (Russel Crowe) come after him to take him back into custody, though Valjean escapes him. As Fantine dies, Valjean promises to take in her daughter and raise her as his own so she could have a good future. And... then later there is some revolution stuff, I assure you.

The film is based off of the play that is based off of the novel by Victor Hugo. And the truth is, I don't think that Hugo would have imagined that his book would be turned into a musical. It's all so sad, but I guess that makes sense because the title is literally “The Miserable.” I, personally, would prefer to see the subject matter handled with more care and finesse than a musical can provide because the story is actually really good, focusing on themes of redemption, selflessness and love in difficult times. Though there have been other adaptations of the book which could provide that, so I should judge this movie on its own merits rather than what I wish it was.

That being said, there are some major flaws that come with it being a musical, but not just any musical, one that has only singing. There are very few words of spoken dialogue and I think that's where I draw the line. You see, some of the song numbers are very good. Anne Hathaway's performance of “I Dreamed A Dream” is absolutely breathtaking and I imagine that it would be as effective a scene if it were not sung. I think that with the song it brings in some emotional weight that would just have to operate as subtext in a version that is more grounded. Same can be said for “Empty Chairs at Empty Tables” much later in the film performed by Marius (Eddie Redmayne) which is another emotional, heart breaking song. That's the up side of musical theatre and cinema; it can more shamelessly emote, not having to portray realism and the reservations that come with that. This is amplified even more by director Tom Hooper's decision to record the songs live rather than having the actors lip sync to prerecorded songs, which is the norm of all musicals. This brought out even more genuine emotions in these scenes and I don't imagine they would have worked nearly as well any other way. But the strength of the bigger song numbers are what really make the movie, where there is a lot in between that doesn't work for me at all.

See, there are points the movie, many many points, in which things are being said from person to person and there is no reason for it to be sung. There often isn't even any music to accompany the singing. And I know that this is a product of it coming from the stage and that's the way it is in the live show... but I don't like it. They aren't singing songs, they are just singing dialogue to one another and it can be, and should be spoken. Any emotional truths that come from the better song numbers are countered by how false this makes the in between scenes feel. I don't need to hear Hugh Jackman sing about how he is going up the stairs to talk to Russel Crowe. Just talk!

This would also clear up some gaps in the narrative because if the story were told in a more traditional manner, I might understand it better. A lot happens and we're just supposed to accept that it happens. For example, several characters die, which could be understandable if I knew why. It's no secret that Fantine dies fairly early on in the story, but in the way the story is told, I see no reason that she should. She gets fired from the factory and gets into prostitution and without skipping a beat she is deathly ill and on her way out. I think that more time was supposed to have elapsed than what is seen, but it's not clear. It's not that I want the film to be longer, because it really is long enough, I just wish it was explained, at least in passing as to why she is suddenly sick. I get it, they're poor and in really rough times, but people still don't randomly drop dead. I could only speculate... perhaps when she got some of her teeth pulled out there was an infection that grew out of control. Seems likely, but it's never said.

Les Misérables isn't a bad film. It features some great performances for the most part, (I don't even mind Russel Crowe as much as most people seem to) both of Hollywood names and veterans of the stage show. Already there is a lot of Oscar attention surrounding the film, as Jackman and Hathaway have acting nomination and apparently it's a frontrunner for best picture. Should it be? Well, it's well enough made and will likely please fans of the stage show. It didn't sit all that well with me, though I enjoyed certain portions of it quite a bit. I would be happier seeing Lincoln walk away with the gold or maybe Beasts of the Southern Wild. Whatever the case, how much you will enjoy Les Misérables is entirely dependent on how much you like singing and whether or not you are willing suspend your disbelief so that you can actually keep track of the story.