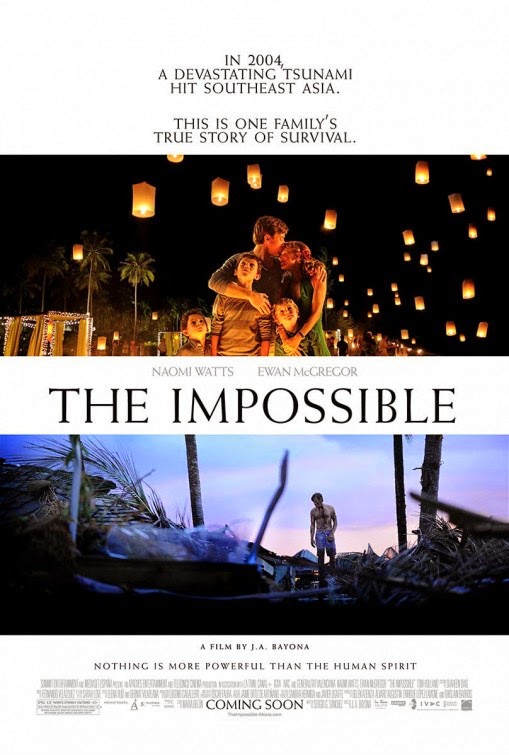 A woman sits down next to young Lucas, one of the members of his family to survive the tsunami that shook Thailand on Boxing Day 2004. They gaze at the stars and she tells him that some of the stars are still alive and some of them died thousands of years ago, but their light travels longer than they live. When Lucas asks how you can tell, out of so many stars in the sky, which ones are alive and which have died, she tells him honestly that there is no way to tell; it is impossible.

The Impossible tells the true story of the Bennett family who are on vacation in Thailand and are swept away by the Tsunami right from the back yard of their vacation resort and separated from one another. They have to find ways to survive, not knowing who is still alive and who is not. It is a sweeping emotional epic and shook me in a way that I have not experienced in the theatre for a long time.

The film starts off quite tranquil, much like the family's vacation no doubt. We're given a sense of the characters and just enough time to come to like them before things get chaotic. In fact, I almost wish that one could go into the movie not knowing that it's a natural disaster picture so that when it happens it is a shocking twist rather than an inevitability. But of course, people want to know what movies are actually about before going to see them so that would be hard to pull off. That being said, when the tsunami approaches, it was an extremely effective portion of the movie. But I would encourage people to not watch the trailer because I feel there are some reveals in the film that are spoiled from it and to go in with some element of mystery would have made my watching the movie even better.

Back to the tsunami. That was an incredible spectacle to behold. No splattering horror film could prepare you for these scenes. This is a real life horror and the idea that real people were caught in it makes it all the more disturbing. One has to give major credit to the special effects team behind the disaster. I think from this side of the world it is easy to see something on the news and think it's devastating, but be able to turn off the news and carry on with our lives relatively unaffected. What director Juan Antonio Bayona and team achieve is putting you in the eyes of the victims, and in the heart of the overwhelming chaos the waves create.

What makes this film even better is that I think that it shows the victims of this relatively recent event a fair amount of respect. I won't say who lives and who dies in the film, but it doesn't unfairly show us a happy story of survivors without also having us take in the losses of countless others. It is based off a true story after all, and it wouldn't be true without the moments we see of loss and mourning from many other survivors.

But at the same time, while this is a very emotional film, it does not focus on tragedy. After watching it, I did not feel emotionally drained and discouraged. In fact, it is a story that reaffirms faith in either a higher power or the compassion of humanity. It is not a story of sadness without a sense of hope and I think that is one of the most important aspects of this film. It does warm the heart and inspire the soul. I think it important to see the kind of film where people genuinely struggle and overcome adversity which, yes I know, can describe almost every screenplay ever written, but in this case it is far more real and of epic proportions.

Naomi Watts plays Maria and gives an Oscar calibre performance, particularly while in the midst of the disaster and fortunately she has been given a nomination. She and her eldest son Lucas (Tom Holland) are being swept away by the wave and unable to reach one another. It is as distressing to watch as it sounds. Unjustly, Holland hasn't been overly acknowledged for his performance in this movie, though I feel it is one of the finest performances from a new actor I've seen in a long time. Ewan McGregor also does an amazing job as Henry and hasn't been given the credit that I feel he's due. In fact, I can't help but feel that this whole movie isn't getting the attention it deserves. It only had a small number of Oscar nods and I thought it was better than a number of the best picture nominations. There is a perfectly good best picture empty slot which could have been filled with this film. To not do so seems insulting to me, but it's too late now.

The Impossible is some amazing film making. I have to confess that there were portions of the movie that moved me to tears and it didn't even feel like that is what the film makers were trying to accomplish. You know, sometimes you know that they're gunning real hard to make people cry. The visuals and the story itself were so moving and emotionally stirring that it couldn't be helped. It never felt false or forced. It just lets you experience the disaster and feel the losses and gains of those who survived. And if a film can show us a glimpse of someone else's life and alter our perspective just enough to make us a little more grateful for our own, then that is something worth celebrating.