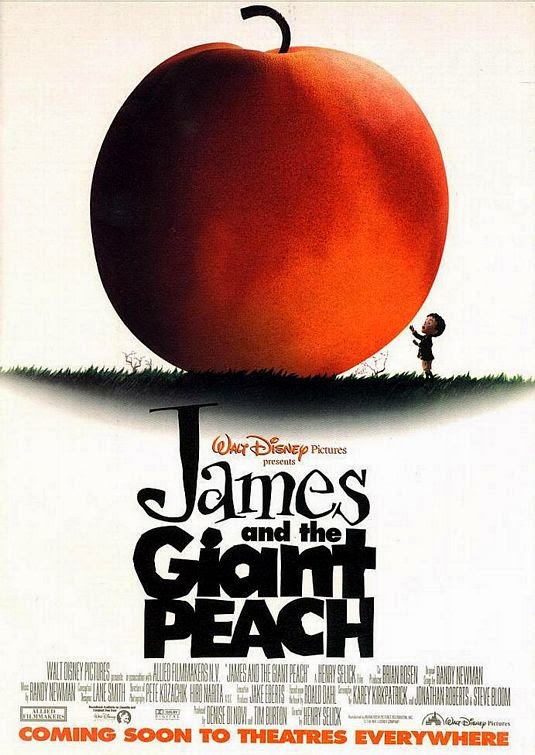 I remember reading many of Roald Dahl's books when I was growing up in elementary school in the 90's. I particularly remember The BFG, Charlie and the Chocolate Factory, The Fantastic Mr. Fox and James and the Giant Peach. I liked his way of storytelling because he never talked down to his young audience and wasn't afraid of incorporating darker elements into his stories. Plus, his ideas were always very wondrous, appealing very much to my and many children's imaginations. When my class read James and the Giant Peach, it was around the time when the feature film adaptation came out. Now, Roald Dahl had refused studios for years to adapt his book into a movie but after he died, his widow Liccy Dahl gave Disney permission to turn it into a film. Behind the helm was Henry Selick, acclaimed stop motion director of the classic The Nightmare Before Christmas, and Tim Burton would produce as well. Yes, that's right, Tim Burton is only the producer of The Nightmare Before Christmas, not the director. I'm surprised how many people still don't seem to know this.

The story is mostly loyal to the book, though there are some minor changes. James (Paul Terry) is a happy young lad who has dreams of going to New York city with his parents, But one day, his mom and dad are eaten by a vicious rhinoceros leaving him with his nasty old aunts who put him to work all day and treat him like garbage. One day though, his luck changes when a strange mysterious man (Pete Postlethwaite) gives him a bag of magical crocodile tongues. However, in his excitement he trips and the crocodile tongues spill out and disappear, leaving James with nothing. One of them, however, enters the old dead tree in their yard and makes a peach grow on it for the first time in many years. Not only that, but the peach grows an amazingly large size. After his aunts try make some money off of it, James hides in the peach and meets a whole bunch of giant bugs, who must have gotten magical powers from the crocodiles tongues also because they can speak fluent English... and are human sized. James and the group decide to escape together and they break the peach off of its tree and roll it into the ocean to make it to New York leaving James' nasty aunts behind.

I'm glad that the movie version was made when it was, because I don't imagine that this film could have been made much earlier than it was and probably not with anyone but this creative team. With The Nightmare Before Christmas, the boundaries of what stop motion animation could do had been pushed and it's further pushed with James and the Giant Peach, as it would also occasionally blend live action with the stop motion sequences. It simply wouldn't look very good and I think Roald Dahl knew that at the time. Plus, the Tim Burton-esque visuals add to much of the charm, although it doesn't feel like it has his influence as strongly as Nightmare Before Christmas did. The visual element plays very much into the success of the movie and even could go as far as being a plot point, with James' physical transformation particularly. It adds that extra sense of wonder and shows that almost as much work and imagination went into creating the world in the film, as it was into creating the story in the first place. If this movie was made today, it might be semi-realistic looking CG Animation and that would just be a really different experience than the charming stop motion here.

The bugs help shape the film into something really entertaining. Each with a unique look and personality, they turn the film into a fun clash of characters. Not to mention that giant stop motion bugs have a definite appeal to kids. My favourite characters were the blind and panicked earthworm, the proper and distinguished grasshopper, and the mysterious, yet tender spider. Their personalities are all a little bit exaggerated, but I think that's the point. James is grounded in reality, but he's been taken on a fantastic journey with these larger than life characters who literally sing and dance about friendship and food. Reality takes a back seat for the sake of the outrageous story.

Making it a musical worked some of the time. Poor young Paul Terry is not a naturally gifted singer, so when he has a long musical solo at the beginning it is... strained. The songs worked the best when they were bigger numbers by the whole group and there was a strong visual element to it. The songs, for the most part, weren't amazingly memorable, though rarely bad. Unlike The Nightmare Before Christmas who was scored by Danny Elfman, James and the Giant Peach had music by Randy Newman, hot off of his success with the first Toy Story. His songs are not as strong as Elfman's, but they work better for the kind of movie that this was. It's less epic in scale and its simple fun storytelling almost hides the impressive ambition of the film.

Though I never owned this film and as such, didn't watch it a whole lot as a kid, revisiting it was still a real treat. It's quite the gem, even though it's not overly recognized or talked about much today. I imagine that kids today would still be enthralled with the visual style and fun characters... oh who am I kidding? I bet adults would be just as into it as long as they're willing to let themselves watch a kids movie. And it's a good tale too, inspiring kids to stand up for themselves and find validation through true friendship, even if those friends are unusual characters. I think Roald Dahl would have been pleased that his message got through.