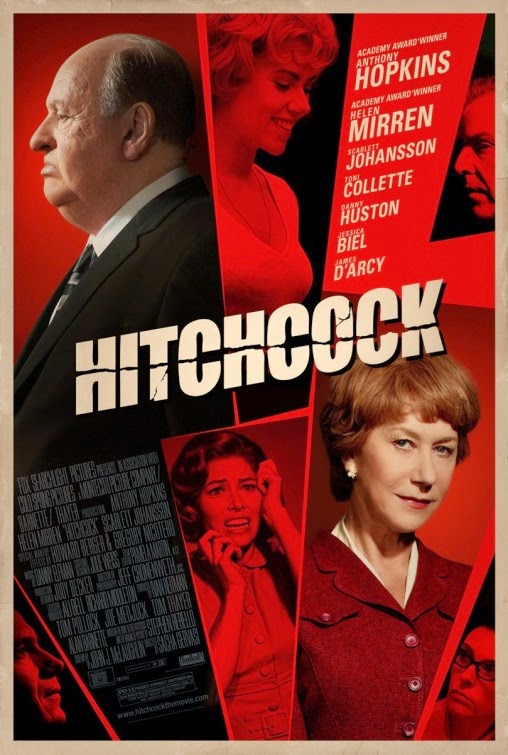 When I was fairly young, my Dad showed my older brother and I some classic Alfred Hitchcock movies. I don't remember how old exactly, but I remember watching The Birds and Vertigo and possibly Rear Window, though that one may have been at another time. Having mostly been raised on Disney movies and Star Trek, the Hitchcock films were not like anything I had seen before. Dark, suspenseful... adult, but not full of blood and violence. They just mature themes and ideas, which stimulated the mind, but didn't force feed it. Only a few years ago did I watch Psycho, one of Hitchcock's most famous films and was thrilled at how daring it was, taking risks that many film makers wouldn't dare do even now. I'm actually a little surprised that a movie hasn't been made about him until now.

Hitchcock follows the great director Alfred Hitchcock (Anthony Hopkins) as he just finished screening his hit film North by Northwest. Now in his 60's, the press is challenging him, claiming that it's time to move aside and quit while he's ahead and let new directors to come in. Hitchcock knows that he needs to do something different in order to keep his fans guessing because he believed that a director was only as good as his last movie. He finds the book Psycho and finds the chilling real life story of the murderer Ed Gein terrifying and fascinating and wanted it to be his next movie. However, the studios refuse to fund his picture due to the disturbing content leaving the legendary director to fund it himself with his wife Alma (Helen Mirren). But even when you're the biggest director in Hollywood, funding your own feature film is an expensive venture and requires severe sacrifices.

While Hitchcock is a very good film, it isn't outstanding, though it feels like it should have been. I think it's because it all seems rather ambitious and tries to accomplish a lot, but only fully succeeds at some of what it sets out to do. It is at least smart in that it doesn't try and capture all of Hitchcock's extensive career, but just focuses on his time working on Psycho. That was a good choice because apparently it was a time when a lot was on the line, so the stakes are instantly high. It was a movie where his career, finances, and reputation were all on the line. And though we know how the story ends, for the most part, we are invested in the film for different reasons.

This is the main thing that the movie has going for it: the relationship, both personally and professionally, between Hitchcock and his wife Alma is quite a remarkable and complicated one. Hitchcock is well known for his beautiful blonde leading ladies that he often had some obsessions with, and that is explored in this movie, though remains inconclusive so not to make any bold statements that cannot be confirmed. But it shows the relationship between the couple to be one of pure admiration and respect, and as a number of conflicts are introduced, we see things get shaken up between them. There is the financial tension as well as a somewhat suspicious writing partner of Alma's, Whitfield Cook (Danny Huston). But it is interesting the integral part she played in Hitchcock's entire career, often being overlooked by the public, but offering crucial insight into his film making process. This is something that still goes on today as Christopher Nolan's wife acts as producer on his films and is, for the most part, not well acknowledged by the public. Hitchcock accurately presents us with the potential difficulties of mixing your romantic relationship with your professional life, and were it not due to the couple's passion for film and one another, the strain might have been too much.

One thing the film tried to explore was Hitchcock's obsession with death and how he carried the characters of his film, in this case, the killer, with him wherever he went. There were many scenes where an imagined Ed Gein was talking with him and looming over him, unbeknownst to everyone else. It was an interesting idea to explore, but I didn't feel that it was all that well developed and at times even felt like an intrusion into the more conventional narrative. Perhaps that would work well in a story that focused more on Hitchcock's relationship with his films, but I feel this is a film about his him and his wife. The filming of Psycho was just the perfect back drop for that story. If they wanted to explore Hitchcock's psychological obsessions a bit more, the film should have been longer. At an hour and forty minutes it can only accomplish so much and there is nothing wrong with that. Not everything should be an all encompassing epic story.

Anthony Hopkins plays Alfred Hitchcock and does a pretty good job. His performance's strength is in the details of Hitchcock's mannerisms and way of speaking. The make up really sells it also. I would often forget it was Hopkin's in the suit, though every now and then I would hear him in there and be reminded. It's not a flawless performance, but an admirable attempt to emulate the very distinct and animated character that Hitchcock was. But it also showed that there was a lot to Hitchcock and how his past achievements were at times a burden to him because of the pressures it put on him.

Helen Mirren does a great job as Alma, a strong lady with a distinct personality from her husband, being able to stand up to him and tell him what would make his film stronger or how her husband's actions and decisions affect her. You can see her frustration in that she understands what she lends to her husband's work, but doesn't get the recognition for it. For the most part it doesn't seem to bother her, but when Hitchcock doesn't seem to give her recognition either, that loss of support turns her to exploring other creative avenues, which leads to some compromising positions with Whitfield Cook, though I am happy with how that story turned out. I won't give it away, but I'm happy it didn't lead into a very familiar plot pattern.

While the script could use a bit more polishing as far as story and pacing goes, at the very least it has strong dialogue, full of wit and vigour. That coupled with the strong performances, and you have a pretty entertaining flick. I think it's reflective of Hitchcock's personality more than his actual work in films. And I'm glad that it had the sense of humour that it did because if it took itself too seriously, I might not have enjoyed it that much. But I walked away satisfied, and while it may not be the Oscar contender that it was meant to be, it at least offers us a glimpse into the mind of a visionary film maker who left an impenetrable foot print on Hollywood.