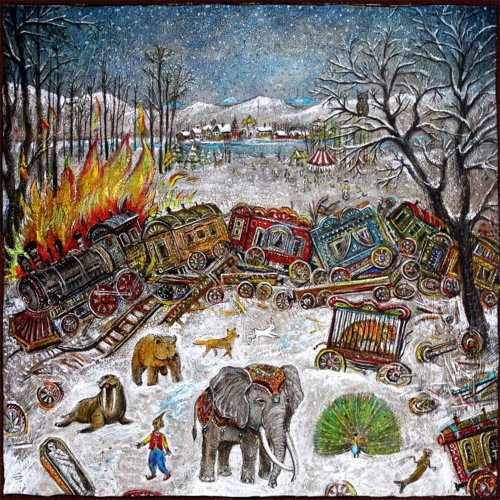 mewithoutYou's latest album, Ten Stories is a significant release, but not just on a musical level. The band has joined the ranks of many great artists this day and age who have gone independent and self released their music. While they left their long relationship with Tooth & Nail records on good terms (unlike Radiohead and EMI), they felt it was time to move on and try something different. And why not? Their fan following was strong enough that the record label was no longer the source of security that it was. So, first I want to acknowledge to accomplishment of going independent and taking on the additional task of self promotion. It's no doubt a lot of work, but probably very rewarding.

One of the things I mentioned about their previous album It's All Crazy! It's All False! It's All a Dream! It's Alright, was that taking that dramatic stylistic leap meant that they could go anywhere with their music. I imagine that it was very freeing. In Ten Stories, we reap the benefit from that decision. Though, unlike the last album, the scope of the album is not as easy to pinpoint. As such, my first impression of the album was admittedly a bit underwhelming. It wasn't just me though. I spoke with Jacke Karashae, a musician and fellow music reviewer, and after listening to it once he wasn't that impressed either. But I had enough faith in the band to give it another listen and found the second time was far more rewarding (as did Jacke Karashae). And by the third time, I came to really love it. This is something I find quite regularly with mewithoutYou's music; it rewards time and time again for the faithful listener. I am now a very big fan of Ten Stories. It is easily their most diverse and adventurous album that they've produced yet.

They definitely drifted back away from their folk sound, which they fully indulged with It's All Crazy! It's All False! It's All a Dream! It's Alright and at times have returned to their hardcore rock roots, though as refined as it was in Brother, Sister. Though, it only appears on occasion in this album, starting with the opening track, “February, 1878” which seems like a followup to “January, 1979” off of Catch For Us The Foxes. I suppose the initial worry with this opening track is wondering if they would be playing it safe and defaulting back to their old style. I would say that worry leaves about half way through the song. Instead of playing folk songs, they explore various avenues of rock, which is actually a pretty diverse pallet to paint with. The songs drift flawlessly into one another, telling the story of a circus train which crashes as an elephant tries to free the other animals. They are no strangers to stories about animals as there have been consistent parables and metaphors with animals in the last two albums and even a little bit in their early work, but this is the first times that it has been a really clear and consistent story through the album. The story of Brother, Sister was very loose and more of an emotional arc than a real concept album.

The album never really drags. The structure is quite well thought out as every time the energy begins to wind down, it picks up again and goes through somewhat of a journey again. The fast paced songs are well spaced out and we travel through all sorts of moods and tempos. Some of the albums finest moments are the songs with the higher energy though. I am a big fan of “Cardiff Giant,” which has a light groove to it but takes some dramatic turns. I also thoroughly enjoy their fast and emotionally intense “Fox's Dream of the Log Flume.” “Elephant In The Dock” tells the story of the elephant being put on trial. It's actually quite dramatic and amusingly quotable. It seems a bit goofy at first glance, but it seems like the song is taking the subject matter very seriously. “The elephant refused to swear the oath, said 'I don't know anything about truth, but I know falsehood when I see it and it looks like this whole world you made.'”

Ten Stories finishes with the fantastic song, “All Circles” which doesn't journey far from its main hook, but it's so catchy and the simple lyrical loop is so addictive and clever that it leaves a great final impression on the album. I mean seriously, this is great: “All circles presuppose they'll end where they begin, but only in their leaving can they ever come back 'round.” It sounds terrific.

Ten Stories is an album that flows very naturally and feels remarkably sure considering how unfamiliar much of the territory is. With their last album, it was new and adventurous, but didn't always feel like the natural path for the band. I thought that they played folk rock well, but I think that the shortcomings of It's All Crazy... become more apparent because of how well this album succeeds. They play relatively more tame music than their old work, but it feels really natural and eased into. It seems that the band has found themselves in a comfortable place, not only in how accessible their music now is, but also it seems that they've found a way of blending their sounds into something that works for them. I've often enjoyed Aaron Weiss' vocal style, even though he doesn't come across as a naturally gifted singer. But I really feel like they make music that works for how he sings. And they haven't abandoned his shouting poetry style, but have found ways to fit it into their new accessible style. Often it's used as a way to elevate the emotion and drama near the end of a song. It actually works really well.

Brother, Sister is still the album that I hold very dear to me and I think the truth is that there isn't as much to connect to emotionally in Ten Stories, but I have to admit that from a songwriting standpoint, it holds up just as well. This is a really great album and I'm glad that they took this direction. This will probably go down as one of their best releases, but then again, I have no idea what they will do next. But I am looking forward to it. That much can be said for certain.

I also want to reflect a little bit on my overall mewithoutYou project that I've taken on this month. I think it was a good journey to look at their music in depth. I wouldn't do that with every artist, but the good part about their music is that it has a lot of substance and seems worthy to delve into. Hearing how they have evolved over the last decade is rewarding in that it's given me the opportunity to hear a band that has been willing to take risks, but still keep their music and lyrics uncompromisingly honest. I've come to appreciate them a whole lot more. They have become one of my favourite bands through this. So, if you haven't checked them out, I couldn't recommend it more. Thanks for reading.