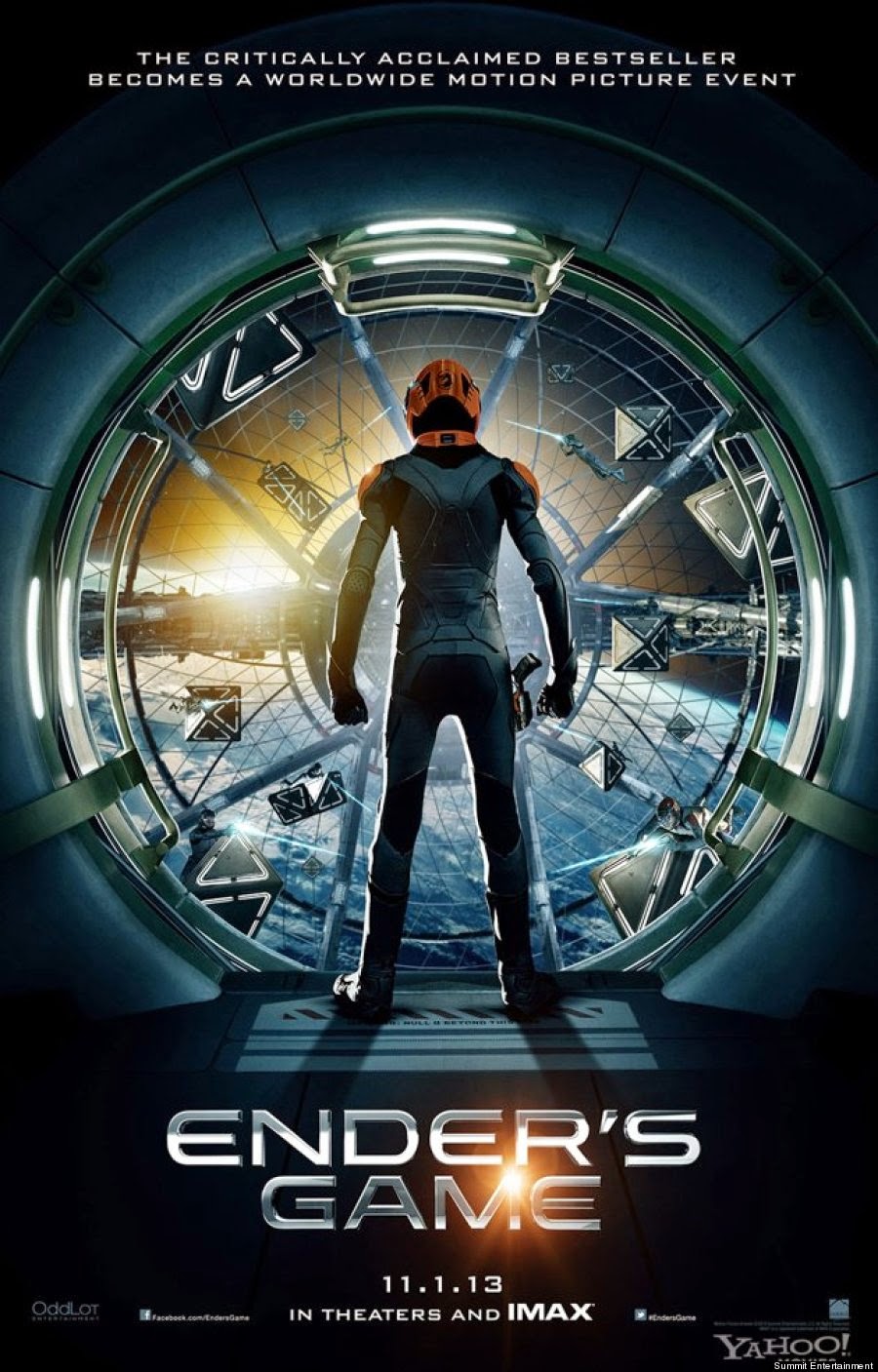 I suppose I should start by saying that I have never read the book Ender's Game. In some ways I prefer this when going to see movies adapted from novels. That way I go into the theatre with very few expectations of the movie as an adaptation and just go in to see how it fairs as a movie. For example, when watching the now classic Lord of the Rings movies, I never really felt like there were pieces of the puzzle missing because I never read the novels. Many fans of the book were outraged that certain “crucial” scenes were missing, but what they were looking for was a movie tailored to them specifically rather than an adaptation that tells the story in a new medium with different parameters than a novel. Movies will never be able to capture every detail and nuance that can be explored in a novel, but it can still be a successful film with different details and nuances that serve the story well.

And if you're wondering what my comments are on the the whole controversy surrounding writer Orson Scott Card and his opinions... he has opinions and that's his right and they are of very little consequence to me and didn't affect my viewing of the movie in any way.

The film follows Ender (Asa Butterfield), a young boy competing in battle school as children are testing for their intelligence and problem solving in combat situations. The military are looking for young minds to lead their fleets against an alien race who attacked Earth years ago in an attempt to colonize it. Anticipating their next attack very soon, the Earth fleet find Ender, a genius with unprecedented battle strategies. So, they snatch him up and put him through test after test to determine if he will be the saviour of the human race.

I liked Ender's Game on a surface level, but the more I think about it, the less satisfied I am with the film. Even without having read the book, I still got the sense that the film couldn't take the weight of its ambition. It wasn't given the time to explore its concepts well enough, not at under two hours. It goes through all the motions, but doesn't carry the emotional weight or natural character progression that was needed for a movie with an implied psychological edge. For it to be effective we needed to really understand Ender's struggle, but we only get glimpses of it. There was mention of him needing to be an outcast, but I never really got the impression of isolation because the plot moved forward quickly and he made friends too fast. For this movie to achieve what it wanted to, it could have easily had another half hour added on and I don't think it would have suffered for it. I know it's supposed to be geared toward teens, but hey, they have attention spans too and if your movie is made well enough, they can sit through it.

The cast is pretty impressive bringing in the likes of Harrison Ford, Viola Davis and Ben Kingsley as well as talented young actors like Abigail Breslin and Hailee Steinfeld who were both young Oscars nominees. Asa Butterfield is also a notable talent, or at least I thought so from his performance in Hugo, but here many of the kid actors don't speak their lines naturally. It feels strained. I don't know if that's due to the writing or directing, but it seemed to me that they didn't know what to do with their dialogue. The ones who seemed to have their parts down were Harrison Ford, who does what Ford does, and Ben Kingsley because... I don't know why. He just worked for me. As ridiculous as some of his film choices have been over the years, Kingsley does bring an intensity and professionalism to the screen. He brings it all to his b-grade roles when many other actors would call them in.

I expect that teens and families will enjoy this movie. It's very shiny. The special effects are amazing; it was partially funded by the effects studio Digital Domain so their stakes were high in making he movie look good. They succeeded. And Ender's Game does benefit from having an interesting story at its disposal. These strengths make for good world building and that's something that science fiction thrives off of. It is unlikely that Blade Runner, Star Wars or The Matrix would be the classics they are today if they didn't create their worlds so clearly and fluently. This film isn't quite on the same level as those visually, but the effort put into creating the technology in the film is apparent.

But again, it all comes down to script and pacing. The visuals can only enhance the story telling experience, but if that foundation is weak, special effects are never good enough to fall back on. These characters aren't that well rounded and the story doesn't take time to breathe. Star Wars was pop cinema, but it still gave time to let Luke gaze at the double sun set. There is enough weight in this film's events that it doesn't feel shallow. The first impression is good so many will leave the theatre reasonably satisfied. It's only when you think about the potential of the story and the ramifications of the events within, that you see that Ender's Game is not the future classic it could or should be.