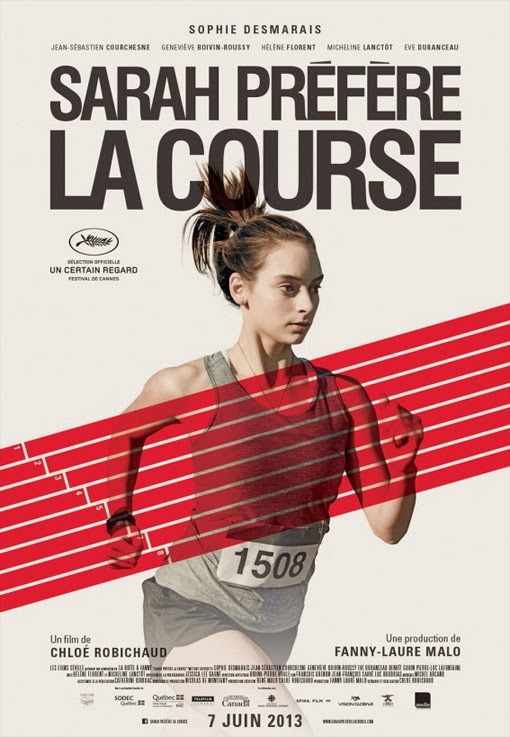 I always make sure that every year at the Vancouver International Film Festival I see at least one Canadian film. This year I saw two, the other being The Dirties, and the second one was a Quebec film called Sarah préfère la course or Sarah Prefers to Run. I haven't seen a lot of French Canadian cinema, but I admire what I have seen. And Quebec has it figured out as far as making local films that their population actually wants to watch. You see, unlike the rest of Canada, the Quebecois actually go out to see locally made movies just as much, if not more than the typical blockbuster. Most of the rest of Canada watches American movies and ignores what we make, though it doesn't help that our films are really poorly marketed. Who even knows when the last Canadian produced feature got distributed in theatres? I don't know. I try to see them when I know their out... but I digress.

This film follows Sarah (Sophie Desmarais), a remarkable athlete as she finishes high school and has big plans to go to McGill University in Montreal where she can continue her competitive running. Her mother is not particular supportive and feels that the financial burden would be too much for them. Sarah does get support from a coworker named Antoine (Jean-Sébastien Courchesne), who wants to get away from his life also. He proposes moving to Montreal together and getting married for the sole purpose of receiving the financial assistance from the government for young couples that are going to school. And yeah, of course that's his only motivation.

Sarah Prefers to Run looks and feels like a festival sort of movie, appealing to art film fans and doesn't hold much mainstream appeal. This isn't a bad thing because it has seen a fair bit of success at the festivals its gone to. And I like it. I enjoy movies like this, but I know when I see them who they could draw in as an audience. But hey, that's why I go to VIFF. It's my chance to see films that I might not get the chance to see at multiplexes. Not to say that there is anything particularly challenging about the film, it just is slow and contemplative rather than obviously hilarious or dramatic. It is a film full of nuance and forces very little on the audience. This is because Sarah is a character of subtleties. She doesn't talk much and rarely does she really open up about herself.

I think that was the idea behind the film; to have a protagonist who is not particularly charismatic. In some ways we find ourselves in Antoine's shoes in that we feel great affection toward Sarah without much of an understanding why. We want to see her succeed and want to love her as a character, but she is closed off and as such, it makes the process a little bit frustrating. Sarah finds fulfilment in running and in some ways that is how she defines herself. So, while it is difficult to get close to Sarah, there is something to admire about her. She loves running and excels at it. She has found the thing in life that liberates her soul which is something that a lot of people in life do not find. We often define ourselves by our work or our family situation, but Sarah has found what it is that she wishes to pursue in life and to some degree she is single minded about that. Perhaps that's something to admire. I haven't decided. On another level it is a little bit sad that she doesn't find much else in life to enjoy.

Sarah is played by Sophie Desmarais who is a wonderful actress. Not many could play this part with this level of competency and I believe that a main reason this film works at all is because of her. Because this is essentially a character piece and Sarah is such a quiet character, Desmarais was a good choice in that she acts with her eyes. She communicates so much without using any words and despite playing a character who isn't very charismatic, she is very charming. In fact, I kinda find myself crushing on her. She is so fascinating to watch and is unbelievably beautiful in a modest and reserved way. It took me by surprise.

Sarah Prefers To Run is the feature film debut of Quebec City native Chloé Robichaud and at only 25 years old, she has a very promising career ahead of her. It is a confident and in depth piece she's written and directed here. And like I mentioned earlier, unlike many Canadian film makers, by being a Quebecois director, she actually could probably make a good living making films like this. I wish her the best of luck and am looking forward to seeing what she comes out with next.