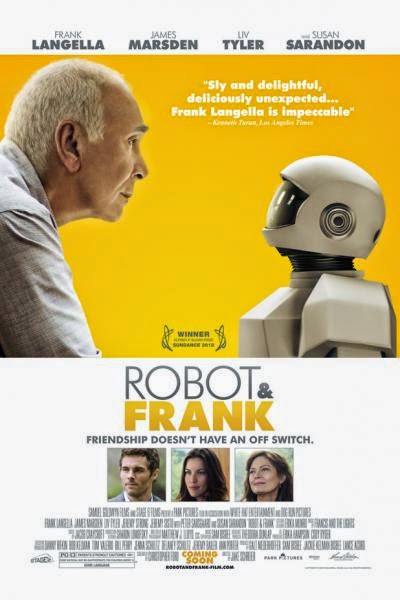 Robot and Frank starts with an ex-cat burglar named Frank (Frank Langella) well into his senior years as he goes with his relatively normal day to day life. His memory isn't what it used to be as he still thinks his son is in college, though he's been done that for 15 years, he thinks his favourite restaurant is still open when it isn't, and he doesn't always remember that his wife and he got a divorce. But he's still bright in some ways, as he knows how to steal from local stores and remembers to make regular visits to the library to hit on the librarian Jennifer (Susan Sarandon). His son Hunter (James Marsden) drives out to visit Frank once a week to check on him, but with a family of his own, he begins to find this too demanding so he buys his dad a robot. Frank is reluctant to take the gift and tries his best to get rid of it, but Robot (voiced by Peter Sarsgaard) is persistent in trying to feed him right and get him plenty of exercise. But Frank has noticed one thing: he can manipulate the robot into doing things that he wants to do... like getting back into the cat burglar business.

One thing that I find interesting when watching science fiction movies is how they try and predict the future. I grew up with a lot of Star Trek so I had the idea that most futuristic technology was centuries away. Of course, in some ways we've reached what they considered to be 23rd century technology, or even surpassed it, but in other ways it still seems unobtainable. Often science fiction winds up being a template for what we aim our technology to be. It all starts with imagination, after all. But in the case of Robot and Frank, it builds off of what already exists today. The world they created is brilliantly crafted to be futuristically modern. In other words, it looks very much like what our near future could be. The cars look like sleeker, more stylized versions of current cars and the music and fashion and interior designs look like what designers would try to do to be more innovative in a number of years. In that regard, the film is visually a real treat to watch.

Robot, of course, is well designed also. He looks like a sleek and practical version of a number of already existing Japanese robots that are out there. It has a good, practical look, but is both cold and inviting. The actual unit is performed by Rachael Ma, who does a stellar job at moving with the strange harshness and grace of a machine. Robot is a charming and loveable character, ironically easier to get along with than Frank himself.

This leads me to the main idea behind the film. It is different than a lot of science fiction not just in the realistic modern technological aspect of it all, but also in the approach it takes toward the robot itself. It is neither a good guy or bad guy and it is intentionally that way. It discusses our humanity and what makes us real people, unlike a machine. While most sci-fi takes us in the direction of robots becoming intelligent to the point where they are self aware and wish to be treated as a human, this robot is completely aware that it is a machine and has no value for its memory or life and just wishes to go through with its task, which is to take care of Frank. It seems that, in this film, its humanity is bestowed upon it by Frank, others, and even us. The line between man and machine is not something we are blurring, but perhaps have already blurred simply by how we personify objects or technology that appears to be intelligent.

Conversely, the films shows that humans have a built in moral compass and can choose right from wrong where technology simply has a list of priorities and directives to follow. They can do things that we would see as wrong, but in a sense they are innocent due to their ignorance from gaps in their programming. In the film, Robot is constantly trying to do the right thing for Frank, but Frank is a man who knowingly ignores his moral compass for his own gain. By some people's definition, Robot is more innocent and even more human than Frank. This isn't discussed in the movie outright of course, they're smart enough to leave that to the audience and keep the focus on the actual story. These are just things to ponder after watching. This is good; cinema shouldn't cram these thoughts down our throats, but give us the opportunity to discover them ourselves.

The movie seems to play a lot on the theme of memory for a number of reasons. In some ways it is quite literal, as Frank's memory is failing him and his robot counterpart has a perfect memory. But it is a portrait of a man and his memories as he's trapped in his past. I suppose a lot of ageing people love remembering their glory days and reliving their memories. It's not like Frank has a promising future. Apart from death, he could face jail or a memory clinic, which he feels is a prison, whether it is or not. Frank looks to the past, while Robot can only look to the future as his whole existence is simply for keeping Frank alive and improve his health. In a sense it makes them the antithesis of one another.

Robot and Frank is a great film, seemingly unambitious, but accomplishes a lot because it is deeply considered. It's a humble production and works well because it has a sure footed cast and director performing a smart script that is funny and at times, extremely human.