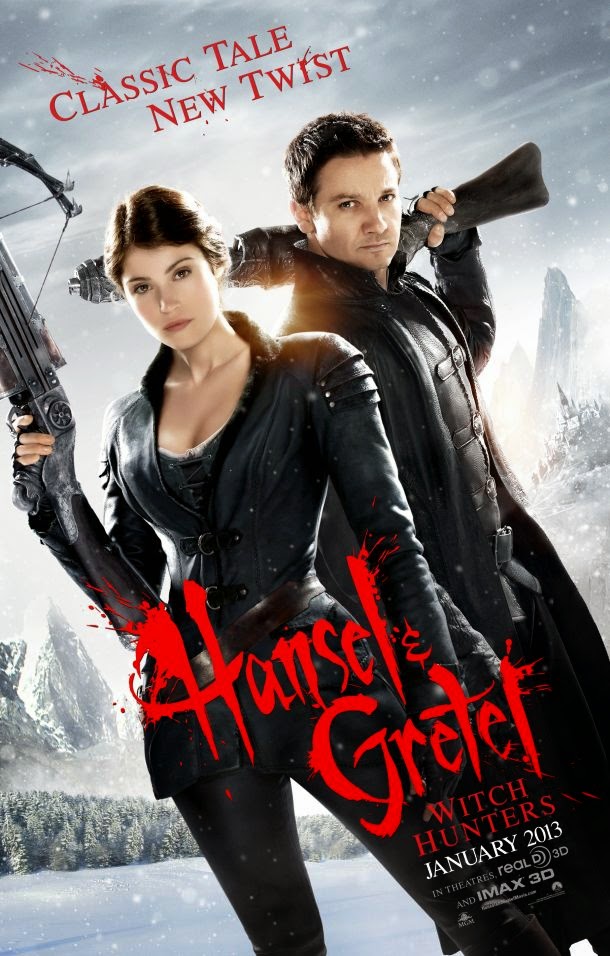 Studios love to capitalize on the success of other films, and most recently there has been a huge wave of new adaptations of fairy tales since Tim Burton's Alice In Wonderland was a huge hit in 2010. Nothing has really taken off the way that one had though as the new Red Riding Hood failed to please as did Mirror Mirror, the cuter of two adaptations of Snow White. The other one, Snow White and the Huntsman on the other hand was a financial success, though audience reactions seemed mixed. What do I think of these? I have no idea. I haven't actually watched any of these films, despite being interested in a couple of them. I did however watch Hollywood's latest curious spin on an old tale; Hansel and Gretel: Witch Hunters, which expands the classic story, taking place after the young siblings escape and kill the witch in the candy house. The spin is that on that fateful night they were abandoned by their parents and never saw them again. This takes place after that event.

Hansel and Gretel (Jeremy Renner and Gemma Arterton) are all grown up and have become bounty hunters, taking their resentment and bitterness toward the witch that nearly killed them as children and making a lucrative living killing witches all over the land. They have been called into a town that is having a severe witch problem with eleven of the town's children have gone missing. The town have had no luck because in the woods is a very powerful grand witch (Famke Janssen) who can disguise her grotesque appearance as a normal person. So... Hansel and Gretel are on the case... to kill the witches and save the kids.

In all honesty, I actually like the premise of this film. I think it's a fun spin on the classic tale. One doesn't just nearly get killed by a witch and then walk away from it as if nothing happened. What happened to Hansel and Gretel? Well, they turned their misfortune into a living and did the world good by killing witches. I could see writers having a lot of fun coming up with that and building upon it.

That being said, the delivery did not quite do the premise justice. It's not that it was horribly made or performed, it just didn't really know what it was trying to be. You see, the film is too juvenile to appeal to most adults, but far too profane and gruesome to be suitable for children. I guess that makes it just right for teenagers who sneak into films that they shouldn't see. Hansel and Gretel shares a striking resemblance to 2004's Van Helsing, Huge Jackman's star vehicle after his first couple X-Men films. Flawed as it was, Van Helsing had a better knowledge of what it was: a cheesy, fantasy, steam punk horror for all ages. This movie is a cheesy, fantasy, steam punk horror... but for almost no one.

The truth of the matter is that the profanity doesn't fit well with the movie. I can take swearing in cinema; I've heard it all before. But this is jarring. I expect that it's the time period. It doesn't fit well in this strange period piece, anachronisms and all. Yes, I understand that it's not trying to be realistic considering all of the unrealistic steam punk technology, but the language still makes it feel too modern and inconsistent. And what does it add, honestly? I suspect that they were aiming for humour with that at times, but it didn't achieve it.

That does feel like one of the downsides of the film. It isn't nearly as fun as it should be. It looks so dark and gloomy and lacks the lighthearted approach that made Van Helsing work to some degree. This looks and feels like it's taking itself very seriously, with a dark colour pallet and grim, bloody visuals. Also, why not play around with the fantasy technology a little bit more? If you have improbable weaponry, sometimes it's fun to see how it works. We don't get to see the imagination behind it, we just have to accept it. The direction is inconsistent with the quirky, self aware script, as if the director was not in on the joke. Not to say that the script is all that amazing; it has it's moments, but drops the ball on some great opportunities. Apparently Hansel is diabetic from when the witch force fed him candy as a kid. This is a great idea, but is barely touched on other than a way to force a little more tension into the climax of the film. Shame really, I feel there could have been more built on that.

The actors are in on the joke luckily. Gemma Arterton and Jeremy Renner seem to be having fun and their action sequences are often quite amusing. This movie doesn't quite meet what they're capable of as actors, but as a paycheque movie and a chance to test their star power in a typically lacklustre movie season, taking this movie on doesn't seem like an illogical move. I don't imagine it will do any damage to their image at the very least.

What can be said about Hansel And Gretel: Witch Hunters is that it is mildly amusing and has some good action, which perhaps is all it promises. And if it delivers that much in a season that is often used as a studio dumping ground, should I really ask for more? Can I really expect a movie with such a simple premise to deliver something more than mindless action and blood splatter?

Actually, yes. Yes I can.