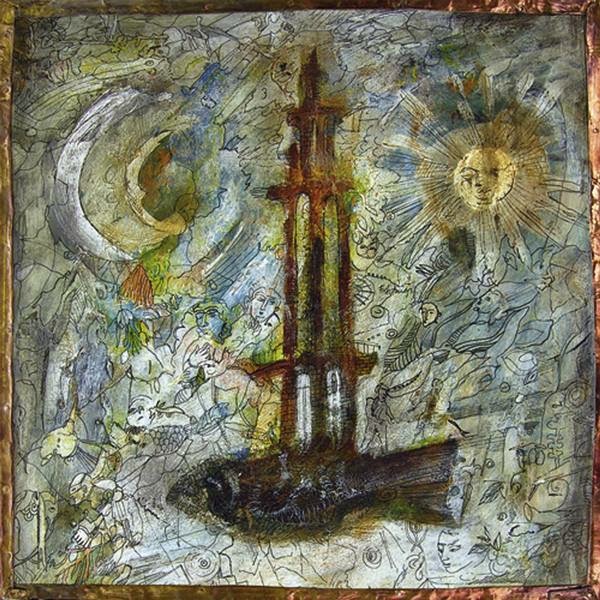 This was the first album I heard in its entirety by mewithoutYou as it came out not too long after I started to take a notable interest in the band. And, to be honest, it was a great place to start. I think that if I were a fledgling fan of the band, I might not have attached to the the way I did if I went straight into their more aggressive stuff in great abundance. Brother, Sister takes their trademark sound and builds on it, expanding it into other genres and uncharted territory. It's a bold leap of an album that sounds like them enough so not to alienate their already loyal fan base. In the band there were already some changes as bassist Daniel Pishock left the band and was replaced by Greg Jehanian. Unlike the band's previous work, this feels much more like a loose concept album, telling a gritty story about a man dealing with lust and fighting temptations and self loathing. So, it touches on similar themes to their past music, but does it in a much more fluid manner.

When I first heard Brother, Sister I was impressed, but the scope of the album didn't hit me until about a year or so later. I was going through a spiritual crisis of my own, battling lust and self loathing. As I listened to the album, I found struggles remarkably similar to my own, in a sense calling me out on the lies that my mind was telling me and I was choosing to believe. A hard reality to face, but this album helped me get my life back on track, which shows how much power honest music and lyrics have.

The album begins with “Messes of Men,” a story of lusting sailors, which introduces Aaron Wiess' alternative singing style which he takes on for much of the album in place of the shouting poetic style, which dominated the last two albums. He takes on a more subdued, calm singing style, which is unusual, but flexible in what it can emote. This song starts the album off letting you know right away that they're trying out something new in this album, though they're consistent with their vision. It leads into “The Dryness & The Rain” which is a little more their typical style, though features a guest vocalist during the chorus who is none other than singer Jeremy Enigk of Sunny Day Real Estate and The Fire Theft. He also makes a very welcome appearance later in the album in the song “O, Porcupine.”

The third track is one of the band's finest and a personal favourite of mine, “Wolf Am I! (And Shadow)” which is a brilliantly potent lyrical masterpiece. It is a fast pace rock song, propelled by quick and dramatic guitar and bass line. It almost feels like it summarizes the album as it spills the emotions of a self loathing man and shows the glimmer of hope at the end. But it works so well because it exposes the soul and shows the unfortunately selfish side of depression with lyrics like “There I go, showing off again. Self impressed by how well I can put myself down. And then go again, to the next further removed level of that same exact feigned humility...” which spoke to me in such a way that I understood the level in which my own misery was something crafted by me for me. Wonderful song, and it's not even three minutes long.

It then enters the first of three songs, spaced through the album. This one is called “Yellow Spider” and provides some calm after the last fast paced song. Later in the album would come “Orange Spider” and then near the end would be “Brownish Spider” which are all calm interludes between particularly emotional and dramatic songs. This fits with the lyrical content of the songs also as they say “Yellow (or whichever colour) spider, yellow leaf, yellow spider, yellow leaf, confirms my deepest held belief.” This shows that through all of the chaos and pain in his life, there are still calm moments that help confirm his faith and give him reason to go on. It's a charming touch that really helps shape the album.

After “Yellow Spider” comes “A Glass Can Only Spill What it Contains” which is another strong song which helps display the groovy talents of their new bass player. No offence to their former bass player, but I find that Greg Jehanian works better with the band, but that could also be attributed to stronger and clearer production and better overall songwriting. “Nice & Blue, Pt. 2” then starts. This is a continuation of the first “Nice & Blue” which was on their first album [A→B] Life. I took the opportunity to listen to these songs back to back for the first time and it's clear that “Pt. 2” builds off of a lot of the musical and lyrical ideas, but is more polished, refined and comparatively more conservative. Still angsty, but not nearly as much.

There really aren't any weak tracks as “The Sun & The Moon,” “C-Minor,” and “In A Market Dimly Lit” all add variation into the mix and help add to the mood and theme of the album. But Brother, Sister shines its brightest in it final act. “O, Porcupine” starts off not too noteworthy, but builds up half way through into an emotional explosion of sorts. In a sense, this is the final act of mewithoutYou's early angst driven sound, whether the band knew it at the time or not. It takes a tonal and somewhat joyful(ish) as Jeremy Enigk enters again and sings “In darkness your life shines on me” while Weiss begins to do his trademark poetic shouting. It's very dramatic and is one of the band's finest moments. It's followed by the final Spider song, “Brownish Spider” which is a needed calm before the final track opens.

“In A Sweater Poorly Knit” is the ideal finale to the album, an emotional epic of a song which gives the needed dramatic arc to finish Brother, Sister off with the needed emotional satisfaction. It features guest harpist Timbre, who gives the song a gentle contrast to the rock driven tune. What this song is, in my opinion, is a full emotional surrender, giving up all of the woes that were were so predominant in the album and give them up to God, allowing for the album to come to a hopeful conclusion. Even though this is a dark, dramatic and at times depressing album, it really leaves me feeling warm once it all wraps up. That is good storytelling through music.

I would have a tough time imagining that mewithoutYou could top this one. It expands their sound in a smart way, still being emotional and edgy, but allowing other instrumentation in the mix, like the harp, a small brass section and melodica. Their songwriting ability is further diversified, making this easily their most experimental album, but it is also their most accessible. This is also smart because people who were disinterested in the band because of their abrasive sound could probably warm up to this album, or at least moments in it. I can't recommend it more highly. I would place Brother, Sister in my list of top ten favourite albums and offer it as chicken soup for the angst ridden soul.