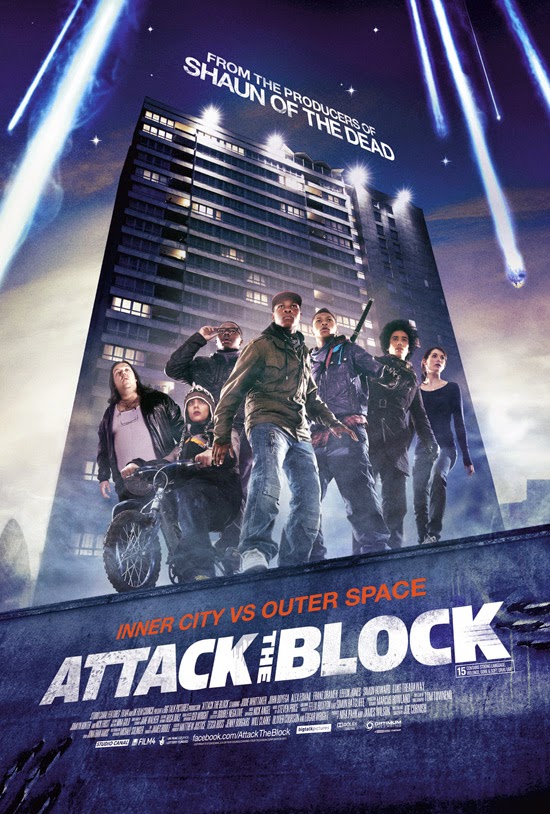 A few years ago there was a film that seemed to garner a lot of buzz, but sadly never made it to the big screens here in Canada; not Vancouver anyway. I rarely am one to give into hype, but this one had me genuinely interested. And fortunately, the trailers that I saw didn't really give that much away. Attack the Block follows a group of teenaged thugs that, after mugging a woman, come across a strange creature that literally falls from the sky. After the creature attacks them and mauls their leader, Moses' face, they beat it to death and take it somewhere safe to eventually claim their prize, after all, it's a life form that fell from the sky. However, more creatures are falling to the ground as the night continues, but they're all much bigger and more vicious. And they seem to have taken a very special interest in Moses and his gang.

Movies sometimes earn a reputation for a reason and I think it's safe to say that Attack The Block earned its notoriety. It's one of the best monster movies I've seen in a long time. Then again, the monster movie genre hasn't really had a big output lately. The only other ones I can think of in the last few years have been The Host, Super 8, and Cloverfield, all of which were pretty good, but mainly featured a single large monster. These monsters are smaller, but more plentiful. One of the big differences though, is that they are not invincible. Individually, they can be killed, but pose a threat because of how many there are.

I have to say, much of the charm of the film comes from these beasts. Their design is creative and strangely compelling. I think what makes them work as well as they do is that it's rare that you can get a really good look at them. They're around often, but the shots of them are often quick. Also, their black design hides the details and often all you see if a black figure with glowing teeth, which is quite creepy. This is a case where the monsters remain mysterious and threatening through the whole movie. We never ease into them, which is good and shows how effectively they were used.

But why the film works as well as it does is because of the main characters. Each with their own personalities and distinct look, watching some young, detestable thugs turn into heroes is an exciting and even, sometimes, emotional journey. At the beginning of the film we are presented with what most of the world would see from these characters, they are young trouble makers that are breaking the law and robbing someone. It doesn't look like their first time. But as we get to know them, we see there are two sides to their story. And as their lives are in jeopardy, we genuinely care about whether or not they make it out alive. This is not a shallow slasher film where the humans are there to be eliminated one at a time; this feels like how real life would be if something like this were to happen.

Attack the Block challenges on our definition of a hero. Moses and his gang are victims of circumstance, or at least that's the reason they fall back on for their life of crime. It seems that it isn't in their nature to be so unruly, but how they perceive as their only way to survive the inner city. I think they just had no opportunity to rise to the occasion until the events of this film. We're told that we shouldn't judge people by their appearances, but with Moses and his friends, it seems that we also can't really judge people by their actions necessarily. Of course, at that point, what can we judge people on? I guess it goes back to that old saying about walking a mile in a man's shoes.

Above all, Attack the Block is very entertaining, with a witty script that takes a lot of turns and keeps you guessing. You never really know how it's all going to turn out. If only as much time was taken in the script department for a lot of other movies that came out these days, well... we'd have better movies. This film is a clever blend of comedy, science fiction, and horror and understands that the characters dictate the direction of the story. I wouldn't hesitate to recommend it, if you don't mind translating British slang.