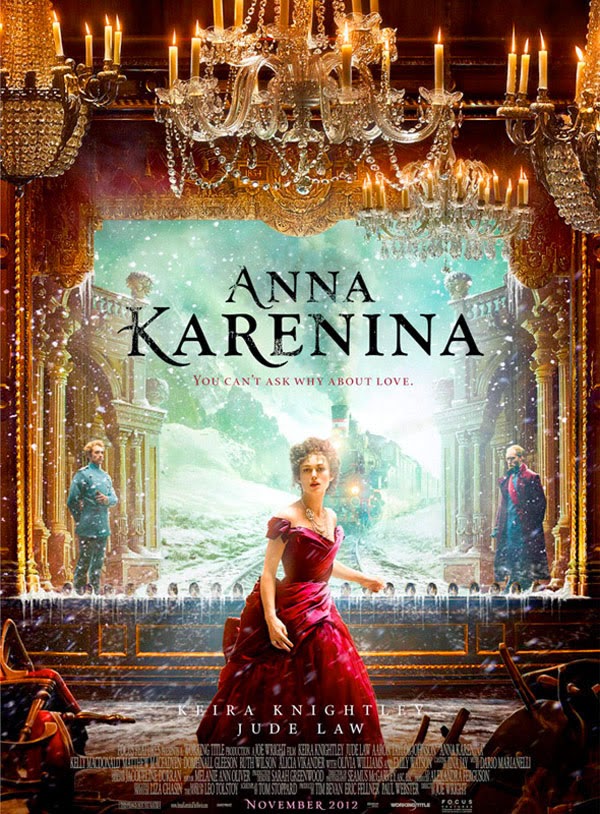 As 2012 starts coming to a close, we are getting a whole wave of films that are big Oscar contenders, as is the norm. I don't know why this is traditionally the season for Academy Award pictures to come out, but it's been that way for a long time. I suppose the Academy has a bad memory and can't remember what happened in the Summer or heaven forbid February. Anyway, poking fun aside, this is often a frustrating time of year for me because I really like watching Oscar calibre films, and with how busy the season is, I find it hard to make the time to see many of the movies that I want to see. I do find time for a few though, and this year I have managed to catch Joe Wright's adaptation of Anna Karenina. And it has many of the Oscar staples going for it. Namely, it's a period piece and it's directed by Joe Wright, who, since his debut Pride and Prejudice back in 2005, has made several Oscar contenders. He followed that up with Atonement in 2007. After not doing as well with The Soloist and trying his hand in the action genre with Hanna, he's coming back into adapting more classic literature. So, as you see, he's back with Keira Knightly as his leading lady so you know he means business.

Anna Karenina is adapted from a novel by Leo Tolstoy, one of Russia's most famous writers from the 19th century. Knightly stars as Anna Karenina, a married aristocrat in Russia, who on a trip to Moscow, finds herself being pursued romantically by Count Vronsky (Aaron Taylor-Johnson). And while at first she denies him, his persistence gets the best of her and she succumbs to his seduction. But the consequences are grave for her as their relationship slowly becomes more and more obvious in public. Her husband Alexei Karenin (Jude Law) begins to get word of their inappropriate behaviour and battles between wanting to keep appearances and wanting to give his wife free will.

There have been many film and television adaptations of Anna Karenina through the years, the earliest was made almost 100 years ago. So, what could Joe Wright bring to the story that would make it his own? Well, in order to come to conclusions about the depth of a film, I usually ask myself if I could write a paper on it, or a thorough review if you will. Tolstoy is a famous writer for a reason because of his depth of characters and story so it seems pretty obvious that someone could. But in the case of this film, I think one could write a paper on the directorial choices made through the movie and how the visual aspect marries the story. Instead of a traditional telling of the story, Wright makes this into a somewhat surreal stage presentation, as if it were live theatre captured on film. For better or for worse, the style of the movie draws a lot of attention to itself.

Some critics have not taken to the visual style of the film, claiming that it is all style and no substance. I would argue that there is substance, the style can just be distracting, which is a fair enough criticism. But for me personally, I like the spectacle of it all. I was swept away by the visuals and the business of it. The technical aspect fascinates me and drew me into the film more, but part of that is from my film making training. I wonder how Wright did it all because his long travelling shots are so intricate and detailed, rarely cutting from a single shot, covering entire dialogues and scene changes. When I was in school, we saw his long steady cam shots in Pride and Prejudice and they were impressive and captivating, particularly for a debut feature. Now, he's much more practised and has polished this technique, this time giving a clear stylistic reason for it. And why not? If Anna Karenina has been adapted so many times, why not give this one a unique visual appeal, otherwise, some might not find much justification for seeing this one instead of another. I have no doubt this will at least be nominated for art direction and cinematography come Oscar season.

I also wouldn't be too surprised if we saw Keira Knightly get another nomination for Best Actress, since Joe Wright clearly knows how to work with her and get a great performance. I know that some find her irritating, but I have to confess that I am a Keira Knightly fan and have been since she got her big break in Pirates of the Caribbean almost ten years ago. And while she hasn't fared as well in blockbusters since then, she has often proven herself a very capable actress and roles like Anna Karenina prove that she deserves attention for more than just her pretty face. So, I'm glad that she has found parts that suit her strengths as an actress and I look forward to more from her. Jude Law also performs very well as Alexei Karenin, a man conflicted between his morals and his anger for the injustices he's gone through. There are some very sad moments with him where you feel his frustration and hear his pain. I'm not too sure about the performance of Aaron Taylor-Johnson as Anna's young lover, Count Vronsky. I say I'm not sure because I find him absolutely detestable and to be a really frustrating character, but perhaps that's the point? If he is the embodiment of immoral lustful desires, perhaps he was not supposed to be a likeable character, but rather just charming on the surface. What I can say for certain is that he is a very different character from Kick-Ass, which is the other role is well known for at this time, so at least Taylor-Johnson shows some versatility in his parts. And apparently a couple years and a moustache go a long way to age a person.

Anna Karenina is a film with many layers and conflicted, sometimes tortured characters, particularly Anna who, despite her immoral decisions, the film challenges you to sympathize with her. It looks deep into the devilish desires of humanity. I don't think after a single viewing I was able to get everything there was to get. But it is a film I would watch again and could see myself getting much more out of it. Don't get me wrong, I was able to follow and I do feel like I understood it, but I'm told I missed some moments that help round the film out. In particular, I want to pick up more on the romantic subplot between Kitty and Konstantin Levin, which is a fairly large part of the film that I barely touched on. It doesn't connect too heavily on the main plot, but acts as an interesting contrast to Karenina's story.

Now only one question remains... why do all of these Russians sound British?