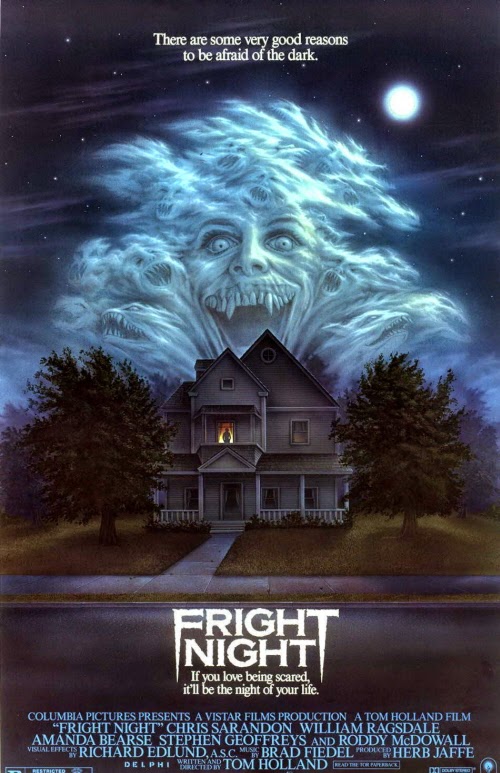 Just to get this straightened out right now, I am reviewing the 1985 Fright Night, not the 2011 film which was a remake, which you may or may not have known. I still have yet to see the new one, but I'm interested in checking it out. Back in that day, vampires weren't what they are today. You know, they weren't particularly romantic, or a teen fantasy and they definitely didn't sparkle. But they weren't really that popular. Vampires were a big deal in the 1930's when Dracula first hit the big screen and again in the 1950's when the Hammer Horror company brought back the Dracula name and that continued well into the 1970's. But in the 80's, there wasn't much of note in the genre as horror movies had taken a turn toward the slasher genre with Halloween and Friday the 13th and movies like that. This is where Fright Night came in. It payed homage to the vampire films of old, while doing something new and interesting for the 1980's. Later, vampires would continue to be popularized by movies like The Lost Boys. It's a chance to see what it would be like if vampires were around today, unlike most of the classic films which were period pieces.

The film opens with Charley Brewster (William Ragsdale) and his girlfriend Amy (Amanda Bearse) making out in Charley's room and the horror movie show Fright Night is playing. Charley is a big fan of the old gothic horror films. Amy decides that maybe it's time for them to take the big step in a physical way, but Charley can't help but notice that a coffin is being brought into the next door neighbour's basement. This ends up with an argument between the couple, but he just can't stop wondering what is going with his new neighbours. He talks to his friend Ed (Stephen Geoffreys), who everyone calls “Evil” and of course, he doesn't think much of it. But one night. Charley is at home and witnesses a girl being seduced by his neighbour, who sprouts fangs and claws before closing the blinds. And wouldn't you know that the girl he saw is on the news as a murder victim. Charley is so freaked out that he goes to the police, who don't believe his story. So, he has no choice but to go to the one man who can help him, Peter Vincent (Roddy McDowall) the host of the Fright Night show and legendary actor who killed many vampires in his old movies.

I think when you watch a lot of teen movies from the 80's, you sort of need to know what you're getting into. This isn't a very serious movie and I have to confess that some of the lines are ridiculously outdated and cheesy, but there is a charm to that. It's a product of its era and that works for some people and won't for others. Fright Night is by no means a classic, but it certainly does have its place in vampire movie history. And its a fun idea. It's like if you mixed Dracula with Hitchcock's Rear Window. Although, I wish there was more ambiguity in regards to whether or not his neighbour was actually a vampire. It's pretty obvious right away, which is kind of a shame because I think what helped make Rear Window the classic that it is, was the fact that there was a lot of mystery.

If you can like your lead and still not be sure if you believe him, that means you have a strong character. In Fright Night, we want people to believe Charley because we know he's right, though he isn't too likeable at first. Fortunately, he becomes a stronger character as the film progresses, which is better than him continuing to be a neglectful and selfish boyfriend. The stronger character of the film is probably Peter Vincent, who is clearly named after Peter Cushing and Vincent Price, two real old horror actors who killed their fair share of vampires in their films. Peter Vincent hides under the facade of a confident and charismatic actor, but it becomes quite clear that he's feeling washed up and useless, with his show Fright Night just recently being cancelled. The reason is that teens were more interested in watching slasher films than his old vampire classics, which is pretty reflective of the time.

The story progresses well in a lot of ways, although there might be a little too much fluff in the second act because it started to feel like it was dragging just before the third act comes in with a strong finish. There is a good amount of build up to the actual big events of the film, which mostly happen near the end for a surprisingly awesome display of 80's special effects. It actually really makes me miss the practical effects of the era because there is something really charming in how shamelessly over the top the gore can be, while actually being really ingenious in delivery. So many movies these days rely on digital blood splatter so nothing comes across as believable. Conversely, there are gore-porn movies where the blood effects are hyper realistic so that it's quite uncomfortable for viewers like myself. These vampire death effects are almost like realistic cartoons in how bloody and exaggerated they are and it doesn't disturb me; it's all fantasy.

While this might not be for everyone, those interested in light horror that allows humour and irony in the mix, will find that Fright Night stands up. It has aged better than some of the films of the era. Personally, this sort of self aware monster flick is much more my style than the slasher films of the time which were popular. Those relied too much on formula, counting down the dead teenagers until one somehow bests the killer. This one occasionally defies expectation while staying true to the roots of the vampire mythos, in a tongue in cheek way.

Did I mention that the vampires don't sparkle?