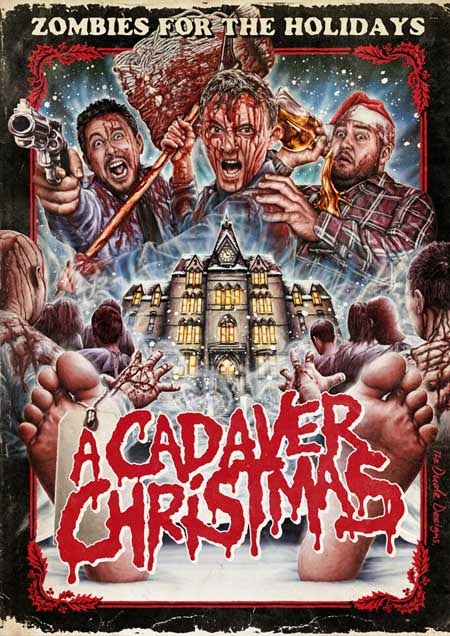 Every year I try and get my hands on what I call “alternative Christmas movies” because we've all seen and heard about the classics like Alistair Sims' A Christmas Carol and It's A Wonderful Life as well as more contemporary classics such as Home Alone and whatever remake of A Christmas Carol is coming out this year. But sometimes something a little different comes along and I always seize the opportunity to introduce my readers to something they may not have seen yet. So, when a friend of mine sent me the link to 2011's A Cadaver Christmas, I bought myself a copy and gathered some friends around and gave it a spin. Was this going to be a new Christmas classic or a re-gift of a movie?

A Cadaver Christmas follows The Janitor (which seems to be his name) (Dan Hale) as he finds his way to a bar on Christmas Eve, and is covered in blood much to Eddie (Ben Hopkins), the bartender and Tom (Hanlon Smith-Dorsey), a local drunk's, surprise. He tells them stories about his night cleaning the university which ended in the cadavers from the science wing getting up and trying to kill and eat him. Some of the cadavers followed him to the bar so after beating them with the help of police officer Sam Sheriff (Yosh Hayashi), they go back to the university to contain this outbreak. And wackiness ensues, naturally.

So, yeah... Christmas classic or re-gift... I can't help but feel that it's right in between. A Cadaver Christmas is a tribute film to the pulp classics of yesteryear, a popular trend with indie film makers to justify their budget constraints. Hey, if it works. It's complete with scratchy film quality and projection glitches. I guess people figured that if Tarantino can do it, they can as well, right? How do you cover up the fact that you are an amateur film maker? Make it so that you're copying the style of the amateur film makers of old! This isn't a put down. In fact, I plan on doing something similar. It's a legitimate tactic to breaking into the film world and there is a demand for cult films of this nature. And hey, throw zombies into the mix and you're almost guaranteed an audience. Genre films make money.

And they do a lot of things right in here. They poke fun at the conventions of the genre and you get a laugh at the cliches that get turned on their head. There is a laugh out loud part where Tom takes a dive to stop a bullet that never winds up firing, and it's this short detail in the film, but winds up being surprisingly funny and memorable. That's one of the things that make the movie work; it lets itself have a bit of fun. It has a sort of gloomy look to it, but down in its heart you can tell that they were just enjoying the ride and they weren't taking the concept too seriously. All the better for it. I don't know about you, but I find I often enjoy zombies a lot more when they're played for laughs, unless it's really well done drama like in The Walking Dead.

There isn't that much unique or new about the actual zombies other than a squabble about what to call them. Sam says they are zombies while the Janitor insists that they call them cadavers. The interchange isn't actually that funny, unfortunately. It feels more like they're just trying to justify the title of the film, but I feel it's unnecessary. It's a good title; no one will question it.  The actual zombies are more of a backdrop to the characters and their development. There is a strange friendship forged between the Janitor and Tom and seeing that grow is probably the closest thing you'll get to a character arc in this film. Well, Sam Sheriff get's to progress a little bit also. The other characters are more or less there to add some amusement before and create a body count. Comes with the genre. Can't be helped.

And what's a shame is that despite these things that made the film worth watching, there were some moments that were cringe-worthy to the point where it can't really be overlooked. There is a scene in particular, and I'm not going to describe it in detail, but it involves Sam's perp (Andrew Harvey) who finds himself alone in a room with a burnt up corpse, who interestingly enough is not a zombie. Again... I won't say what goes down, but I will say that this scene greatly detracted from the movie and I wish it wasn't in there. It was just too much. And I find this a lot in these sort of Grindhouse stylized films; there are just scenes where they go too far. Even when Robert Rodriguez made Planet Terror, there were moments that just did gross out things that didn't really add to the story, so the pros make this error also. Unlike the body count of the zombie gore and all of those things, I find that these moments don't come with the territory. They can be helped and should be. I'm a much bigger fan of subtlety and siding with good taste.

I know it seems ridiculous for me to be pleading for good taste in a movie called A Cadaver Christmas, but there is a line between good fun and bad taste. There can be a lot of fun in a bloody, splatter-fest zombie film! You just gotta know how to balance everything and it's really not easy. Fortunately, if you can put that scene behind you, most of the film is a shlocky good time and festive to boot. So, if you find yourself wanting to watch something a little more... campy and messy this holiday season, you could do worse than this film.