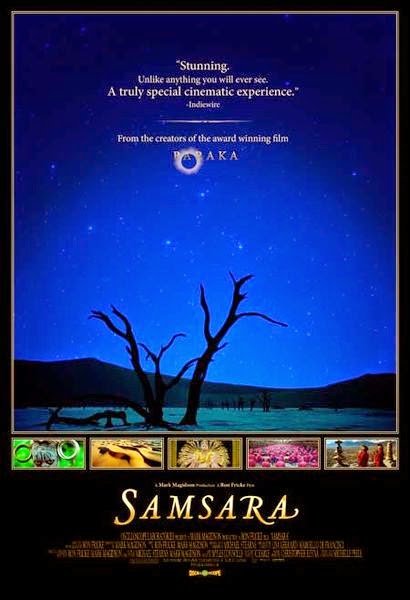 One of the most unusual releases in recent years is Samsara, which probably wasn't made for the mainstream market. Fair enough. The concept of the film is interesting enough. There is no obvious story for the film or even an obvious narrative. It is neither fiction nor documentary, but rather a visual journey through the world put entirely to music with no narration or cohesive story. Over the last few years, director and cinematographer Ron Fricke travelled the world and shot footage with 70mm film. Now, for those of you who don't know, standard film which most Hollywood films are still shot on is 35mm film. The bigger the film, the higher the resolution and the better the picture. Now, with digital cinema being much more common place these days, the picture would not have to be condensed nearly as much in a typical theatre as it would have been if it was transferred into 35mm, which it likely would have been if this movie came out even 6 years ago. Of course, even digital projectors can't play it at its full resolution; only IMAX cinemas can. What does this mean to the casual movie goer? Not that much, but I doubt the casual movie goer will have much interest in Samsara.

It is in some ways comparable to Life In A Day. That one showed different parts of the world in a single day through the eyes of common people. Samsara sees sees the world through the eyes of a single film maker through the course of a few years. It's interesting how we can see so many countries and similar places in the world, but the vision of the project is completely different. Perhaps they are the antithesis of one another. This one has professionals and a budget, where the other one had contributions from everyone and essentially was budgetless. Not to say that this is a big budget picture. I think the entire budget went toward flights and film stock. Very expensive film stock. Other than that, everything else was just capturing the world as it is.

And it does do that very well, for the most part. We get crisp and clear pictures of stunning architecture and natural beauty from all over the world. In fact, one of the things that bothers me about the movie is the fact that it doesn't tell you what you're seeing or where it is. You just are supposed to know... or not worry about it. To contrast, there are also many disturbing imaged throughout the world that we see, like how some foods are mass produced and marketed. Even with only the visuals, it's a pretty vivid picture and helps me appreciate my job all the more.

While watching the film, it at first seemed like a film that simply captured the world with the nonjudgmental eye of the camera lens, but it didn't take long before I saw that, while the camera lens may not be judging, I think that there was an agenda in the editing room. I think it's impossible to make art without some sort of loose agenda or bias of some sort. Not to say that this was loose either. There is a clear push against mass marketing and the treatment of women as sex objects, and rightfully so, but I'm not sure how enlightened we feel after just being inundated with the pictures. It can be frustrating to watch and be completely unable to actually help toward a solution. Though I suppose it isn't their responsibility to give us the solutions, but just bring a jarring awareness to the problems. These are of course, complicated problems where there is no clear solution. As you can see, even just by reflecting on the movie it leads the mind to wonder.

Samsara is certainly a film of vision and superb professionalism, handcrafted so that we can see the world through Ron Fricke's eyes for an hour and a half. Whether you appreciate what he sees is up to you, but I think at the very least there is some beautiful imagery. So, who is this movie for? A few people will love this one for sure. Cinematographers will appreciate it and may want to take notes. Cinephiles who are all about resolution and picture quality will want to see this if not simply because it was filmed entirely in 70mm film. Artsy people will love it because it's pretty and different. Me? Well, I was worried going into the film that I would be bored, but I certainly wasn't. Did I enjoy it? Perhaps. At the very least it was fascinating and offered some food for thought. That's more than I can give many other movies these days.