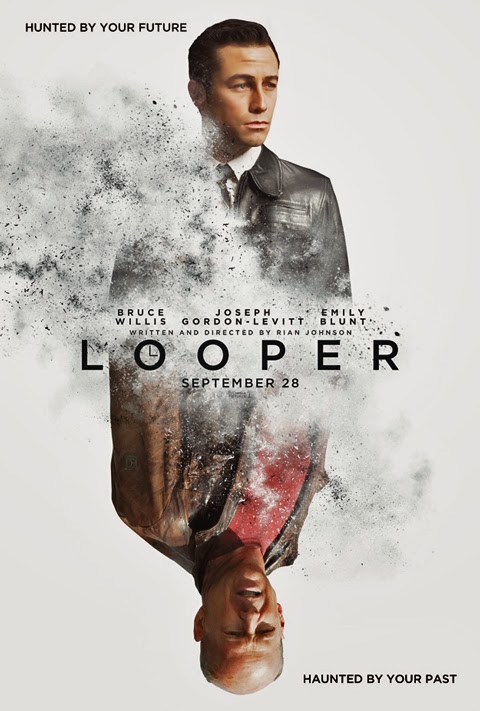 I remember when I first heard of Rian Johnson. There was a special advanced screening of his debut movie Brick back in 2005 and I didn't know anything about it. I unfortunately couldn't make the screening, but some of my co-workers did and they raved about the film. Luckily I caught the film when it was in theatres in limited distribution and I walked away genuinely impressed. It was one of the most unique films I had seen at that point and would remain a favourite of mine for years to come. But, I'm not here to review Brick, though I suppose I should eventually. Rather, I am really impressed with how far Rian Johnson's career has progressed in the past few years as Looper makes his third feature film and it's a huge step from his last films.

This is no low budget feature like Brick was and this is pretty encouraging. The fact that Johnson actually dreams up these stories, writes them, and then brings them to the screen is an accomplishment, especially in the Hollywood system. This isn't the product of a producer dreaming up a way to bring in some big bucks, like making a Battleship movie or something silly like that, but it's the work of an artist working at his art. And this has Bruce Willis in it! Looper is no small feat. And I'm not naive enough to say that producers haven't influenced the film in any way, because I'm sure they have, but it still feels like Johnson's voice. It seems like he is a true auteur in the Hollywood system and that is something to be proud of.

Looper is blessed with a unique and interesting concept. It takes place in the future where time travel has not been invented yet, but it will be 30 years from that point, though it is extremely illegal. And its influence is already in the past because it is being used as a way to preform assassinations, sending people back in time to be killed by Loopers, who are sent to a time and place to shoot their victim, dispose of their bodies and claim their payment. No missing body means a clean and easy job. Their employment comes to an end when they kill their final target: their future selves. Enter Joe (Joseph Gordon-Levitt), one such Looper who gets thrown into a strange situation. His future self (Bruce Willis) is sent back, but doesn't have his face covered, the resulting hesitation leads to his future self besting him and knocking him out. But Joe doesn't run or hide from his employers, but rather he continues to track his self to close the loop, though when they meet up for a conversation, it is clear that future Joe has a mission that he won't give up on: to change the future for the better.

First, one of the items I appreciated about Looper the most was the story. Not only is the initial concept really interesting, but the story really doesn't play out how you think it might. Concepts and plot turns are introduced well into the film, but at no point does it feel like a forced twist, it is just a strong progression. It's been quite a few years since Johnson's last film, The Brothers Bloom, so it seems he took the right amount of time and energy into developing the script so it makes a good amount of sense. Or at least, it makes as much as sense as it can given its a story that plays around with time travel. As events happen to the present Joe, future Joe begins to remember them at the rate that they happen at. You can find flaws and you don't have to look that hard, but it's all forgivable because it makes for interesting and dramatic cinema and at least they stay consistent with the rules of the universe. That's all I ask. I'll buy it as long as the film makers establish it and stick with it.

The film also succeeds thanks to having great actors on board. I guess when you have a solid script, you can bring in solid talent. Paul Dano has a small, but memorable role. Emily Blunt plays a significant part, though you wouldn't know it at first. Jeff Daniels plays a surprisingly charismatic villain. But of course, the film works well, as is more believable, thanks to the performances of Joseph Gordon-Levitt and Bruce Willis who, although don't really look like one another, both play Joe very well. They take some measures to make Gordon-Levitt look more like Willis, changing his eye colour and nose shape, but it works more because he tries his best to match Willis' mannerisms and speech, thankfully without it seeming like a parody. This was part of the reason I was excited about this film; I am a huge fan of both these actors. Willis fulfils his action star obligations, but also adds an emotional tenderness that adds so much to the stake of the character. This is where his strength has always lied, he has always balanced action with drama, being a brute with a heart and mind. Gordon-Levitt also works as an action star, not looking as intimidating, but has a natural physicality to his performance.

Looper shows that there is still a place for high concept science fiction and that there is still new and interesting material to be mined from the genre. This may not be a film for time travel nitpickers, but if you desire escapist entertainment with a brain behind it, this is premium Hollywood material and I'm pleased to see this concept get the treatment it deserves. The film is gritty and hard to swallow at times, with a number of disturbing scenes, but it isn't marketed for kids and doesn't hide the fact that it's heavier material. In a relatively lacklustre year, this is definitely one of the stand out films for entertainment and spectacle.