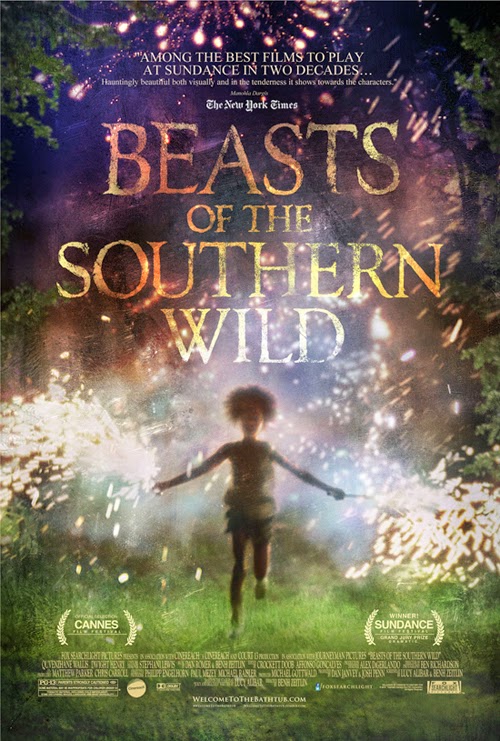 Beasts of the Southern Wild follows a young 6 year old girl named Hushpuppy (Quvenzhané Wallis) who lives with her father, Wink (Dwight Henry), in a bayou community in Louisiana, referred to locally as “The Bathtub.” She is a strong willed child who is given many life lessons from Wink, who gets extremely sick and is hospitalized for a time. When he returns, the community is in panic because a massive storm is approaching and floods the town completely. Wink continues to teach Hushpuppy how to survive under the harshest conditions as they find the other survivors and are forcefully approached by rescue workers.

What is remarkable about this movie is how well it blends realism with the fantasy. There is a fairy tale sort of feel to Beasts of the Southern Wild, though also a gritty reality. Apparently “The Bathtub” is a fictitious community, but it seemed real enough that I would have thought it was an actual place. They treated their material very seriously and painted a very thorough picture, though not all of the details are revealed at first. I suppose what makes the film feel real is that it doesn't at all feel like a fiction movie. It looks a bit more like a documentary because the actors aren't trained professionals. It's a hard task to find actors who aren't actors and then direct them so it's all believable, but co-writer/director Benh Zeitlin did an amazing job of it. Dwight Henry, who plays Wink, is a deli shop owner who worked well for the role because he was a Hurricane Katrina survivor. Quvenzhané Wallis is a gifted young girl, with a rawness and unabashed emotional range that helps keep the movie together. Her acting doesn't really “feel” like a stellar performance, it just is.

The film is about Hushpuppy's strength instilled by her father, as well as their loyalty to each other and the land. I've never really been so attached to a place like they have. Wink feels a loyalty to his junkyard of a house and his community that is beyond logic. Yet, there is something beautiful about it. In fact, that's really what this movie accomplishes; it finds beauty in the most hopeless of places and circumstances. “The Bathtub” is a mess, but it is their home. Wink is a drunken angry man who is stubborn beyond reason, but he is Hushpuppy's father and he loves her. I suppose it's beautiful because it feels like truth, as if there is no synthetic shield between them and us.

The fantasy aspect comes into play as we enter Hushpuppy's imagination. She imagines that aurochs, an ancient cattle that is now extinct (though in this film they look more like boars with funny hats), have been unleashed and are making their way to “The Bathtub.” This is from her thought that everything in the world is connected, so even things that are happening in her home can affect the polar ice caps and release the beasts. This is a powerful and reoccurring image through the movie. There is also a sense of outer-worldly camaraderie that takes place between the community as they interact after the flood. It reminds me of pirates in Peter Pan for some reason. They sit around and drink and be merry, even though most of what they know has been destroyed. That just has a very fantastic feel.

For a directorial debut, Beasts of the Southern Wild is extremely surefooted in every move it makes. It's a bold and charming film, allowing your imagination to explore its terrain, while challenging the audience to know these characters as they go through their hardships. It's as if you are to survive the extreme conditions that the characters do. It's a life that I imagine most movie goers won't be accustomed to. This has been a festival and independent circuit hit that's been performing very well and has received near unanimous praise from critics and the film community. With a modest budget of less than $2 million, it's made a light, but successful $6 million back so Benh Zeitlin should look forward to more high profile work in the near future, if so desires. The Oscar nominations couldn't hurt his chances either. I just hope that whatever he does next is as creative, ambitious, and involving as this film.