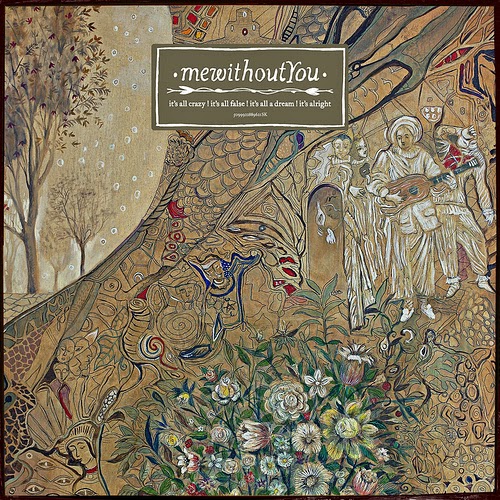 After the towering success of Brother, Sister, mewithoutYou decided to take their music in a different direction. Their guitarist Christopher Kleinberg left the band to pursue a career in medicine, but would occasionally play shows with them when he wasn't in school. Not only did they lose a member and become a 4 piece band, but 2009 saw the release of It's All Crazy! It's All False! It's All a Dream! It's Alright, their fourth album that seemed to all but abandon their previous hardcore rock style. It takes a noticeable more folk-rock direction and the lyrics tell animal parables rather than musing on the struggles of the modern man. Perhaps they did exorcise their demons at the end of Brother, Sister. While some of their fans of their early work found themselves alienated and even betrayed by this strangely happy turn for the band, I don't feel like it came from nowhere.

Much of the groundwork for this album was laid out by Brother, Sister in a number of ways. First, musically they were already transitioning away from their old style in favour for something lighter. Not only did they use different instrumentation, but they explored a different range of emotions apart from angst. Also, like I mentioned in my last review, it felt like their sound had reached its apex and their depressed hardcore style and story had come to a logical conclusion in the song “O, Porcupine.” Perhaps if they were to continue, it would be like beating a dead horse. So, the way I felt when I heard this genre shift, it was surprising, but not really jarring.

It helps that they open with “Every Thought A Thought Of You” which, although it relatively tame compared to most of their work up until this point, still has a decent rock edge. It wouldn't be too out of place on Brother, Sister. The next song, “The Fox, The Crow and The Cookie” jumps head first into the folk style, not just in style but in spirit. It tells a story of a cunning fox and cocky crow as they unwittingly team up on a pastry salesman. It's a fun tune and I enjoy it immensely. What I mean about them channelling the spirit of folk music is that music has roots in story telling and parables told through animals is a long withstanding tradition. This captures that perfectly as does the following song “The Angel of Death Came To David's Room,” which literally tells the story of David in the Bible. Also, very traditional using repetition to have a very communal feel, as if it were a campfire song in which everyone can join in the singing.

The main connection to their previous material is the song “Bullets To Binary (Pt. 2)” which is connected to the original “Bullets To Binary” on [A→B] Life. It begins much the same as the original, though a much more acoustic feel. Unless you hear them right by one another, the link may not be that obvious. It is one of the only moments in the album where Aaron Weiss sings in his shouting poetic style, though a much more tame version of it. The song actually evolves quite a bit as it progresses as it turns into a dramatic chanting. It's a little bit of a darker song than what's on most of the album, though it's not all lighthearted fair here. Actually, maybe I'm crazy, but at times it feels like there is sadness to a number of songs. “Fig With A Bellyache” and “The King Beetle On A Coconut Estate” seem silly on a superficial level, but emotionally I feel that there is a lot more going on here.

I think it's safe to say that this is their most obviously Christian album that they've released. It's not that they've been trying to hide it before, because they haven't, but it seems like the lyrics are the most unabashed worshipful at times. At the end of the song “Timothy Hay” he repeats “what a beautiful God there must be” and the final song "Allah, Allah, Allah" is about how you can see God in every blade of grass any in all of creation, though they use the name Allah, which is interesting and more musical sounding I suppose.

It's All Crazy! It's All False! It's All a Dream! It's Alright is a curious album and a very different side of mewithoutYou. I don't think that the more rigid fans of the band will enjoy it. Conversely people who may not like mewithoutYou generally might find they do enjoy this album. It's a great opportunity to broaden their fan base. At the very least, I can appreciate that they wanted to do something different and they did it. And yeah, they made a folk-rock album very well. And who are we to say what direction a band can or cannot go in? I personally don't mind when a band defies my expectations and throws me something dramatically different. If they feel that they need to explore different avenues to satisfy themselves creatively then we still can get sincere and artistically credible music. I feel that they delivered. That being said, it is a significantly less ambitious album than its predecessor Brother, Sister and perhaps intentionally so, but as such it is less satisfying. I guess that's the burden of being the followup to a masterpiece.

It's All Crazy! It's All False! It's All a Dream! It's Alright's change of direction did leave me wondering where mewithoutYou would go next. Now that they opened the door for them to explore completely new genres and themes in their music, they really could go anywhere they wanted from here. Like it or hate it, this is exciting.