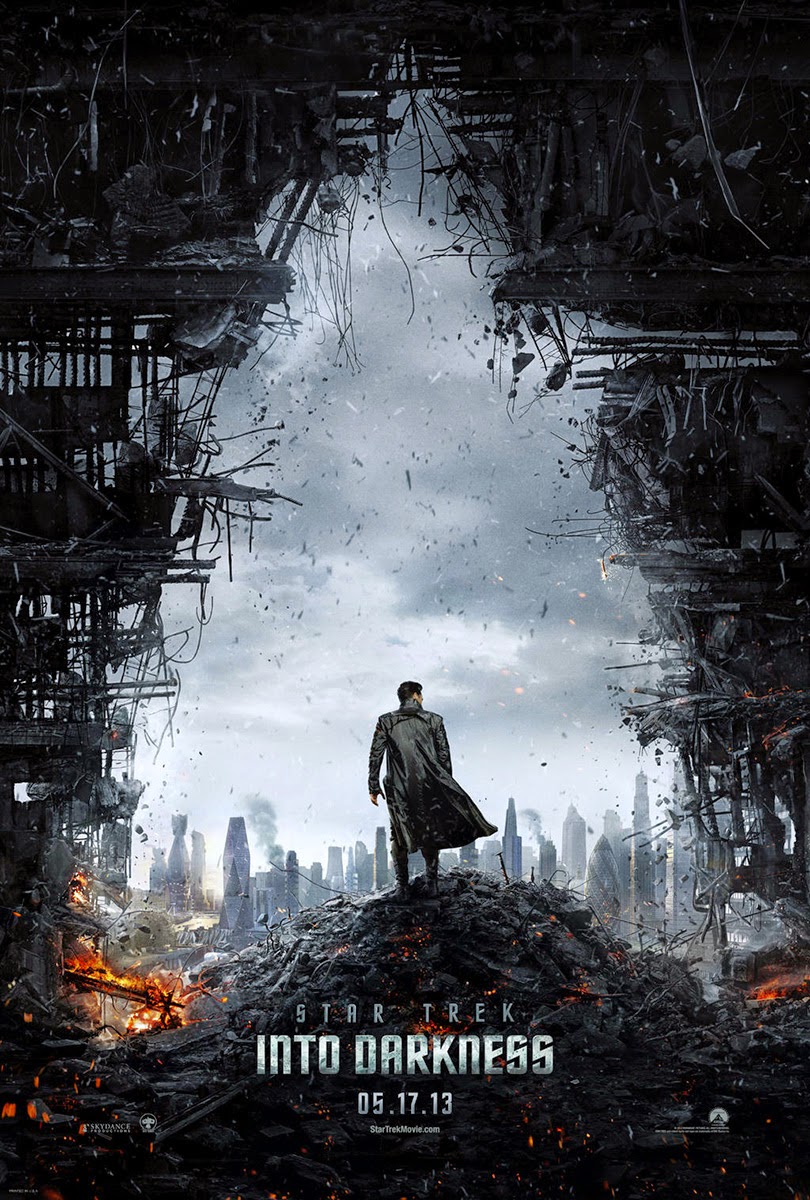 At some point in the 2000's, it seemed that the Star Trek franchise, which had been a strong and memorable presence in both film and television for many years, was starting to jump the shark. Voyager has come to an end, the Next Generation crew hadn't had a genuinely good outing since 1996's First Contact, and the prequel show Enterprise was not well received by fans and was even cancelled early. I personally thought the show wasn't as bad as people thought, but I could see why they were frustrated with it. With viewers dwindling and popular opinion of the franchise being at its lowest, Paramount knew that they had to breathe life back into Star Trek. So, they brought in J.J. Abrams, the man who brought back Mission: Impossible back from the tomb where John Woo buried it.

The new Star Trek brought back Captain James T. Kirk, Spock, and the remaining crew of the Enterprise with a whole new cast and a fresh new time line, opening up a whole new universe of possibilities. The first film in this reboot was a lot of fun, flawed as it was, and was a pretty big hit, bringing the franchise back successfully. And now we have the sequel with Mr. Abrams back at the helm. And Into Darkness feels like a natural follow-up to the 2009 Star Trek, only the stakes are not as grand in scale, but instead much more personal.

Kirk (Chris Pine) and Spock (Zachary Quinto), while on a mission, break the grand federation rule, the Prime Directive, landing Kirk in hot water. He gets demoted and Captain Pike (Bruce Greenwood) takes the Enterprise again with Kirk as his first officer. But before they even get to take the ship into space, there is an emergency on Earth. Starfleet Headquarters has been compromised with a large explosion taking out one of their archival facilities so they gather up all of the captains and first officers to debrief them on the man behind the attack, John Harrison (Benedict Cumberbatch), who they plan to hunt down and capture. Through a turn of events that I would rather not reveal, Kirk gets command back of the Enterprise and tracks Harrison to Kronos, the home world of the Klingons, who aren't on good terms with the Federation right now.

Star Trek Into Darkness is mostly entertaining, but ultimately a very flawed movie. It has the sort of flaws that aren't obvious at first, but once the ride is done and you think about how it all played out, there is a level of disenchantment that happens as you start asking yourself questions. That being said, it's not a bad movie. First, let me talk about what really works.

Much like its predecessor, Into Darkness is a very well polished and professional looking work. Abrams has made a beautiful movie, colourful and shiny. He has a good tone too, balancing humour and drama without it seeming forced or artificial. It comes in part with the crucial understanding he has of the characters. Sometimes just by them being true to themselves, it winds up being kinda funny. Major props also goes to the talented cast who are filling in the big shoes of the original Star Trek cast. Particularly, the on screen chemistry between Chris Pine and Zachary Quinto, which feels legitimately like two companions building up a realistic friendship. I think that this cast is so good, I could probably watch a movie of them trying to bake a cake and still think it's worth watching.

There are some legitimately tense scenes in the film, often leaving me to wonder how the Enterprise and its crew are going to get out of it alive, which is a good thing to wonder. Although, there were some plot points I was able to predict, there were also some turns that I didn't see coming. It's balanced well enough for me.

But onto some of the bad points. One of the problems is that I don't want to reveal too much. I would hate to spoil the movie for someone. But to vaguely get into it, there is a big betrayal of the Enterprise and its crew and in a lot of ways, I feel like there was a great opportunity missed to see the ramifications of that. It seems like a lot of the crucial stories were tied up and then swept under the rug. In fact, I can't help but feel like most of the third act was a bit clunky. This is where the flaws started to show. There were a few too many awkward parallels with a past Star Trek film. It seems like they were too busy trying to pay homage to please fans that they weren't really focused on the best way for the movie to play out. The end results might result in ticking off more fans.

The big villain of the film seemed to me to be a bit over hyped. Perhaps he would have been more effective if he wasn't the front and centre of the marketing campaign, then his real identity might be more of a surprise. As it is, a lot of people apparently knew who he was going into the film, but it plays like it's a big plot twist. I heard rumours, but was surprised enough when it was revealed. I don't know if I should say too much more, but I feel that they were playing too much on people's previous knowledge of the character, and that he didn't actually do anything that made him more than just perhaps another homage. To Cumberbatch's credit, he did his own version of this character, but ultimately I felt that he wasn't well developed enough to be an interesting villain if you, say, didn't know what the name meant to the franchise. What would have been more interesting is if at some point we actually don't know if he's a bad guy or not. With Starfleet doing the things that it does as this movie plays out, there was opportunity for Cumberbatch to be in that grey area and possibly even win the audience over so that we can have even more interesting surprises. I feel like there were some lost opportunities in that respect.

That being said, Star Trek Into Darkness is never a terrible film and is often really good. The packaging is fine, but the hard truth is that the story does not hold up to scrutiny. It just isn't deeply considered enough and focuses too much on action sequences and not enough on fulfilling the promises it makes. At least the overall direction of the franchise still holds a lot of promise and will likely be taken into exciting places. You know, boldly go where no one has gone before... and all that.