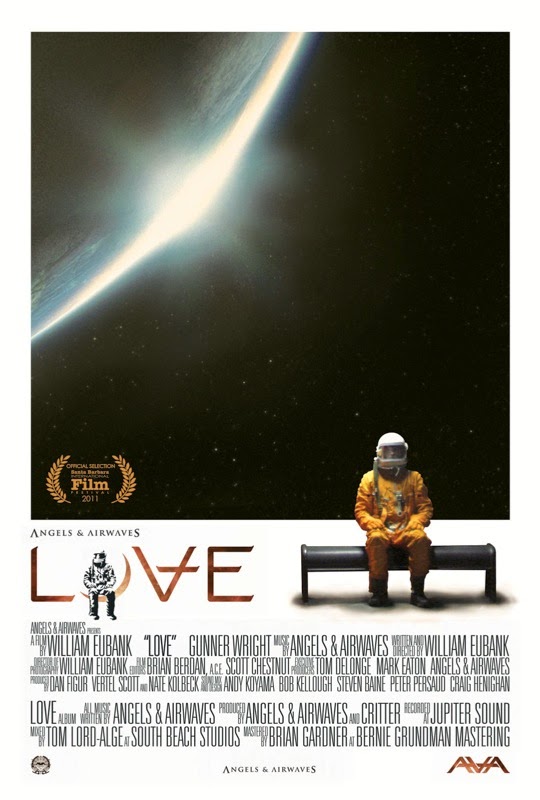 It isn't intentional that I review the movie Love right after reviewing the movie Amour, but it is interesting, especially since the movies couldn't be more different. Perhaps this could be an excellent opportunity to see how the movies explore the concept of love and see the different takes on it, but with this film, I really can't figure out why it's called Love. There might be a convoluted explanation involving separation and isolation and something something, but it's not really obvious to me. What interested me about this film was the isolated spaceship setting as well as it being a one man show. This has spawned some interesting and psychological science fiction films in the past like Silent Running, and, more recently, Moon. I suppose I was hoping for similar achievements from this movie.

It starts during the American Civil War where Captain Lee Briggs (Bradley Horne) is investigating some sort of crash site and he doesn't know what it is. Fast forward to a couple hundred years later and we see Lee Miller (Gunner Wright), who is the lone crew member on board an international space station. He keeps up regular communications with Earth as he maintains orbit until one day he gets a somewhat cryptic message from Huston telling him that there is a problem on the surface so he will not be getting further messages for a while. And so Miller goes on waiting to hear from Earth. And waits... and waits.

This is the directorial debut of William Eubank, who up until this point was primarily a cinematographer, which after you see the movie, makes a lot of sense. It's a movie that is very pretty to look at; it's well shot and full or vibrant imagery. On that level it is a spectacular film, especially considering it was made on a fairly modest budget of $500 000, which by film standards, is pretty low. That being said, it also explains the main flaw of this film which is the severe deficiencies in the story telling department. I guess he can't be held completely at fault as the director for that because there isn't that much of a story to tell. But it turns out he was the writer as well and as a writer, he lacks the knowledge that at times the audience isn't always going to be able to put the pieces together as well as the film maker. If you read my plot synopsis and were wondering what the civil war portions have to do with the main story of the movie, I too was wondering that as I watched the film. It only partially comes together in the end.

The truth is that there is only about 25 minutes of story here for a movie that is thankfully quite short, but still way too long for the lack of content in it. I almost feel like it was trying to be the next 2001: A Space Odyssey, but I don't know if anyone can replicate what Stanley Kubrick did with that movie. Then again, I have the unpopular opinion that he Kubrick didn't even achieve what everyone thought he did, but that's neither here nor there. The point is that Love has a sluggish pace that one can call contemplative, but I might lean more toward tedious. I suppose it might feel more worthwhile if there was at least some pay off at the end... or a better explanation.

I guess what makes this feel a lot less credible is that the band Angels & Airwaves has their name splattered all over it. Not only do they provide the soundtrack, but they co-produced the movie themselves. Thus, we can determine that Love is not so much a full length feature film, but more like a feature length music video for the Angels & Airwaves 2010 album Love. This isn't meant to put down the band because I don't actually know their stuff that well, it just made it feel like it was essentially a commercial for them. This answers my earlier question as to why the movie is called Love. It is called that because the album is called that. I have to admit that the music was for the most part quite enjoyable, but to finance a whole movie for it seems a little... foolhardy or pretentious.

I don't necessarily disagree with the notion of cross medium promotions such as this, at least in concept. I suppose my main complaint is that I just wish it was a whole lot better. Love would work as a music video because it tells a small story and is shot in a very visually interesting way that works well with the music. That's exactly what more music videos should be like. But as a piece of cinema, it is frustrating. If there was more emphasis on the story, it would probably be a really great film because it seems that a lot of ingenuity and creativity went into making this into what it is. I wanted to like it, but it's hard to recommend. I'm sure some people will come to really enjoy it, but for those who appreciate a more traditional narrative and value story over technical merit, this one might be a disappointment.