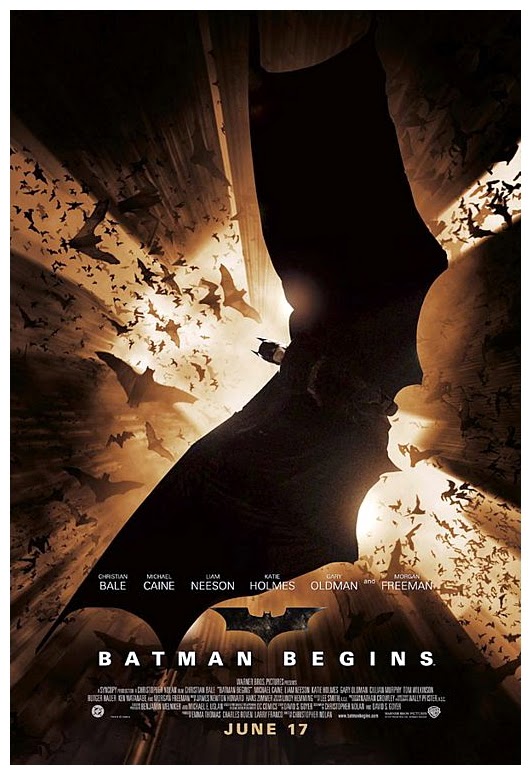 Batman is one of the most legendary comic book characters, not powered by radiation or alien powers, but just a detective's mind and a fat wallet. Batman movies have been a cinema staple for many years and have seen many incarnations. There has been Adam West prancing around with a cartoon bomb in tow, there has been a gritty version based around the animated series of the early 90's, and starting in the late 80's a couple of film makers made very visual cinematic versions of the character. Most of these movies started before comic book movies were the blockbuster powerhouses they are now. Of course, it started with Tim Burton directing Michael Keaton as Bruce Wayne and Batman. I enjoy his two movies, Batman and Batman Returns, to varying degrees and appreciate what they were at the time they came out. Then afterwards, Joel Schumacher made 1995's Batman Forever, which wasn't as well liked, but still a fairly big hit. Then his follow up movie, Batman and Robin was such a big critical and commercial flop that it pretty much killed Batman's big screen viability for years and probably put comic book movies on hold for years until X-Men came in and sparked interest again. I was flirting with the idea of reviewing all of these Batman movies, but maybe I'll get to that another time. For now I wish to focus on Christopher Nolan's trilogy.

Batman Begins was a crucial film for restarting Batman. When I heard the announcement of a new Batman film was not particularly interested; all I wondered was how they were going to screw it up again. Bringing in writer/director Christopher Nolan was a stroke of genius for rebuilding the crumbled movie franchise. While he wasn't a hugely successful director commercially speaking, his films Memento and Insomnia were very well liked by critics and a selective fan base. That was what made me want to see this new Batman. I loved Memento and felt that a grittier and more psychological take on the character would serve it well. Watching the movie now, it has already gained a nostalgic quality for me. It takes me back right to 2005 when this was one of the big movies of the Summer and I first started working at a movie theatre. It's only now starting to feel like a long time ago.

The previous Batman films only touched briefly on the character's origin story so Batman Begins is the first to give us an in depth look at Bruce Wayne (Christian Bale) and what would motivate him to dress up like a Bat and fight crime. It starts with him as a young boy when his parents are tragically killed at gun point by a desperate thug. As Wayne grows up he harbours a deep bitterness toward Joe Chill, the thug who, 14 years later, is about to be released because in prison he shared a cell with Carmine Falcone (Tom Wilkinson), Gotham's most powerful crime boss. Chill is willing to testify, but when he is killed, Bruce is cheated of his vengeance. Realizing that he is becoming someone who he does not like, he disappears from Gotham and travels the world to study the criminal mind. He finds himself in an Asian prison where is met by Henri Ducard (Liam Neeson) who offers him a chance at freedom and an opportunity to train to become an unstoppable warrior. When he finds that he is being trained to become an assassin rather than a crime fighter, Bruce rebels and leaves the League of Shadows to return to Gotham and fight against the crime underworld under a new iconic identity.

Batman Begins takes on the difficult task of taking the Batman mythos and trying to work it into a very realistic universe and their way to justify some of these characters works surprisingly well. Even Batman himself is a bit of a stretch, if you think about it really. But as you are taken not only through the technology at Bruce Wayne's disposal, but also the inner workings of his psyche, it doesn't feel in the movie like it's an enormous stretch at all. He dresses up as a bat to be an icon, an image of fear to criminals rather than some random masked vigilante. He is unstoppable as a crime fighter because he's been trained as a ninja. Yeah, why not? I buy that. It's all handled very seriously and with much consideration.

The theme of the movie is fear and it is explored pretty thoroughly. Fear is the source of power that Carmine Falcone has as many cops and even a judge do what he says on a whim. He controls Gotham through fear of his power. Batman's way to counter this is to fight fire with fire essentially, creating a counter fear for the criminal world to be afraid of just the same. Fear and panic are the source of human destruction which is why it is literally used as a weapon in the final act. The Scarecrow also puts a more literal spin the theme, as he develops a fear toxin which causes people to have panicking hallucinations, which is very true to what The Scarecrow is like in the comics. But their take on Johnathan Crane/Scarecrow is a little different than other renditions of the character that I've seen.

Crane is played by Irish actor Cillian Murphy, who broke out a few years earlier with 28 Days Later. Murphy is mesmerizing in the role and every scene he's in, he steals the show. This was the movie that made him one of my favourite actors, which is an opinion I still hold to this day. What works so well is that as we get to see Crane progress in the movie, we learn that he is just as dangerous and unhinged as the mental patients that he treats in Arkham. When he is introduced he is intelligent and confident, but as you see himself out of the public eye, a devious criminal is revealed. Murphy makes some very strong choices while playing the character, seen particularly in the scene where Batman and Scarecrow meet in Arkham's basement. As Batman looms over the cluster of criminals, Crane comes across as fascinated and entertained by the presence of Batman.

Christian Bale is a strong Bruce Wayne and Batman. He is strongest when he plays Bruce Wayne pretending to be Bruce Wayne, if that makes sense. As he returns to Gotham, he needs to publicly separate himself from the Batman who lurks at night so he puts on the disguise of the shallow playboy billionaire. Also, at this point his Batman voice isn't as over the top as it would come to be in the next movie, so good work there also.

I don't really want to comment on every actor, but overall it was very well cast and performed. I also really like the story as a whole, as we see Batman work his way through the criminal underworld. The more villains he takes down, the closer he gets to a much bigger plot. Nolan knows how to reveal the story and plot points in such a way that the audience keeps guessing. And while the third act gets a little bit messy, that sometimes feels like an issue in the editing room. It doesn't overly detract from the movie as a whole. Batman Begins treated its title character with more respect and consideration than any Batman film had done before and raised the bar for comic book films. And while, apparently this was considered a box office disappointment (even though it was one of the top 10 grossing films of the year... go figure), it gained a solid reputation and would garner more fans through the next couple years. Then, when a sequel was announced, there was a more than healthy amount of hype for it. It started here; a complex and compelling super hero mystery, with enough style and substance to save Batman from the embarrassment of the silly (crappy) movies from the decade before. Thank you Christopher Nolan for your care and precision.