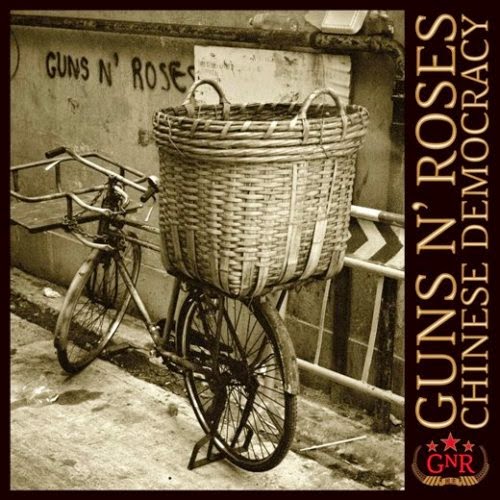 This is a bit of an interesting story to tell. Not the music, but just as far as the album's history goes. Reportedly, the album had been in the works since 1994, and even had a song released in 1999 on the End of Days, an Arnold Schwarzenegger lead apocalypse film, soundtrack. The song was called “Oh My God” and was supposed to be on Guns 'N Roses forthcoming album, but the single was a dud and the album didn't come. There was a version of the album completed in 2000, but when producer Roy Thomas Baker was brought in, he insisted that all of the material get recorded again. Every band member left the band during the album's creation, except for Axl Rose, including members who were brought in to replace members who had left. By 2005 Axl Rose had spent a reported $13 million on studio costs. Chinese Democracy was finally finished and released by November 2008. Having a startling 14 years to record, one can assume that with that much time and energy put into the album that it has no chance to being bad because they could have gone through every note combination possible and found perfection, right? Well, sometimes I think that making music is like cooking; if you leave it in the oven too long you no longer have a desirable product.

The thing is, I don't really hear many moments that come across as something new for the band. There are a lot of heavy, distorted chords and squealing guitar solos put against Axl Rose's howling vocals. But they've been doing that since 1987. The production is smoother, but I wonder if Guns 'N Roses' over-the-top rock style calls for that kind of slick production. It really feels like Rose spent so long on these songs that he lost all objectivity and lost sight of the true potential of these songs, though I'm not even really convinced that there was that much potential. Maybe that is it. Maybe he saw too much potential in these songs and spent years trying to pull water from a stone.

I have to confess right now that I've never been that big a Guns 'N Roses fan. I can appreciate some of their work and yes, I realize that their debut Appetite For Destruction is an extremely popular album and even legendary to some, but it never really gelled with me. It was pretty good, angry 1980's hard rock and it has its place in history, but I do find it a bit overrated. Sue me. At the very least though, that capitalized on the strengths of the band and it was music that Axl Rose's... unique (screechy) voice worked with. Here, it doesn't always seem to fit. This is the most obvious in the piano ballad “This I Love” which is hard on the ears, to put it nicely. To put it bluntly, it's awful. I have similar issues with the track “Street of Dreams.” It doesn't play to the band's strengths. It seems like a pretty typical soft rock tune, but when put together with with Axl Rose's expressive (screechy) singing voice, it doesn't fit and is really unpleasant to listen to.

Now to contradict myself, I also, strangely enough, find that the album's most successful moments are the ones that don't really feel like Guns 'N Roses moments. For example, the last song of the album, “Prostitute” is pretty good. The music is well composed, setting a dark mood while maintaining a pretty gritty rock style. And Rose's voice doesn't go too out there (screechy) most of the time. Plus, the final minute and a half or so of the last track is some great atmospheric instrumental music. As for what the song is about... well, it's called “Prostitute” and I'm not detecting any sort of hidden metaphor in here.

Another album highlight is the song “If The World” which has a funk groove combined with electronic synths, and Latin guitar noodling. It feels like a departure for the band, taking their song writing into uncharted territory, exploring mixing genres and adding their own personality into it. I can admire this song.

But overall, I still just find this to be a tragically average record. They rarely break new ground, and seem to give into their typical Guns 'N Roses sound, which will probably please some fans who have just been itching for new material. But it's like they were trying to come out with an album that is distinguished and classy, but they aren't the kind of band that can sound that way, if not only for the reason that Axl Rose has such an abrasive (screechy) vocal style. But how can one separate that from the band? He's the only consistent member of the band through the album so he's the heart and soul of it. Makes me think that perhaps it was a doomed venture from the start. And for the life of me, I can't see any good reason as to why this album took so long to make given its mediocre results. I've heard improvised albums that are better than this.