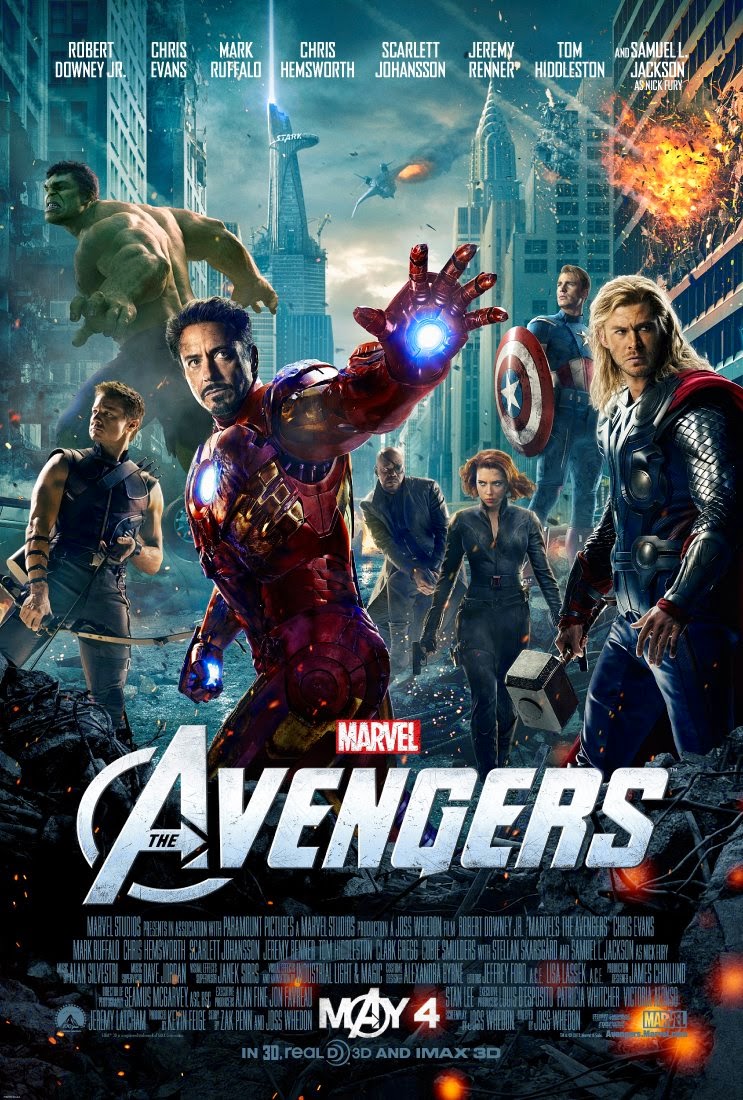 There is every likelihood that this review will not determine whether or not you see The Avengers because chances are, you already have. This film is well on its way to becoming one of the highest grossing movies of all time and broke the US domestic opening records set by The Dark Knight and the most recent Harry Potter film. I'm not here to tell you that The Avengers is the greatest film ever made so if you want to read a review that says that, I'm very sorry, you'll have to read some fan boy's blog. But I will say that it was a brilliant marketing set up that had a pay off that does feel well worth it. Marvel never shied away from the fact that they were planning this big move since they released the first Iron Man movie back in 2008. And it was a brilliant plan to connect the movies together, teasing audiences for this big moment. It was a big risk because if The Avengers underwhelmed moviegoers in any way, it damages the possibility of not just a sequel to this movie, but the separate characters as well. But all of the Marvel films connected to it were all fairly well made and financially successful. I actually enjoyed all of them to some extent.

When I heard that they were bringing in Joss Whedon in to direct the project, it made sense and didn't in different respects. Joss Whedon is a respected figure in the industry and is well connected to the world of comics. He has the admiration from that audience from his hit show Buffy The Vampire Slayer as well as the cult sensation, Firefly. He isn't a stranger to the world of feature film writing as he wrote the screenplay for the first Toy Story, which is a lesser known fact about him. He also penned Alien: Resurrection, but I don't think he likes to talk about that one. However, he is a strange choice in some other ways. Despite the popularity of the show, I never liked Buffy The Vampire Slayer and believe me, friends of mine have tried to get me into it. His other two shows didn't even stay on the air past their first season, and don't worry, that isn't a jab at their quality. Also, the only feature film he directed before this was 2005's Serenity, which pleased the eager Firefly fans, but didn't buzz too loudly at the box office. You would think that Marvel would bring in a more financially viable film maker on board. But he must have presented something to them that brought him on board because he both wrote and directed The Avengers, keeping loyal to his style and the movie universe that has already been established at this point.

Ultimately, his strength as a writer are why the film succeeds because it isn't from the plot. From a story standpoint, the film is unimpressive. To summarize, Loki (Tom Hiddleston) is on Earth and just can't wait to be king. He's answering to some mysterious aliens in another dimension though. He steals a super powerful alien technology called the Tesseract which will summon the alien army to take over Earth. Nick Fury (Samuel L. Jackson) isn't okay with that so he starts to gather up some super heroes to capture Loki and retrieve the Tesseract. He brings in Tony Stark (Robert Downey Jr.), Steve Rogers (Chris Evans), and Bruce Banner (Mark Ruffalo), who are Iron Man, Captain America, and The Hulk respectively. And Thor (Chris Hemsworth) shows up to track down Loki, who is his brother. Plus there is Black Widow (Scarlett Johansson) and Hawkeye (Jeremy Renner). And from that point on there is a lot of fighting and action. It's not a plot so much as a series of celebrities in colourful suits.

I don't believe that in order to make an accessible big budget film you need to have a simple plot like this one because I think that movies like The Dark Knight and the Harry Potter series have had complex and very compelling stories. However, as far as films with thin plots go, this one does its job with quite a bit of finesse. This is where Whedon's strengths come in. He clearly knows these characters and is very loyal to them. These super heroes are why people are watching this movie and have become iconic over their many years in comic books and now in the Hollywood mainstream. He gives them each a personal stake in the story, and while they don't all get time to be fleshed out ideally, there is an understanding that most who see this film will have seen at least most of the previous movies. Like real people, they don't instantly become friends and work well together, but their distinctive (and often flawed) personalities clash. This tension keeps the second act interesting, which is when it had the most opportunity to fall apart. I mean, when you have super heroes who disagree, it can't help but get physical, which intrinsically adds entertainment value.

Whedon's other main strength was what made me enjoy the movie during its entire duration. He has a knack for writing strong comedic dialogue. The sense of humour in The Avengers is what keeps it together. Because the film is not a complex or intellectual blockbuster like The Dark Knight, it runs the danger of becoming a shallow, special effects laden, bore like the Transformers movies. I have already read some reviews that compare it to them. But the humour is not juvenile and senseless, but comes from the truth of the characters as well as an acknowledgement of what kind of movie we're watching. It is able to have fun with itself without talking down to the audience. It shows that thin plots can be executed well.

The other most noteworthy aspect of the movie is the final half hour. At this point it's safe to say that audiences deserved a great action packed payoff for their years of loyalty to Marvel and their films. The trailers haven't hidden the fact that there is a huge battle in the middle of New York city and I will assure you that it's a remarkable spectacle of blockbuster entertainment. Unlike the Transformers movies (sorry for all the comparisons), the action is clear and avoids being overly redundant. This is arguably one of the best action sequences in the history of cinema and in a lot of ways it makes sense why. Each of these heroes have unique abilities and personalities that have been in development for years so it's clear why the action works as well as it did. In Transformers, many of the characters just looked like a big jumbled mechanical mess, but none of these heroes could be confused with one another. The big green Hulk can't get mixed up with the red, white, and blue Captain America. They all have a distinct fighting style, weapons, and mobility. This is also likely why the comics maintained success for as many years as it did.

On the subject of the Hulk, I have to mention that he winds up being one of the most entertaining characters in the film. The Incredible Hulk with Edward Norton as Bruce Banner was very good, but this is the first time I've seen the Hulk portrayed in such a fun manner. Don't worry, he is menacing, but I like the Hulk the most as an ironically comedic character. It's the combination of stupidity and strength; it doesn't fail to make me laugh. And I have to say that while I would have liked Edward Norton as Banner for the sake of consistency, I do like Mark Ruffalo's performance. He plays the character to be a little more under control, but still haunted by the lurking monster that he has in himself. He also brings out more of Banner's intelligence, after all, he is a scientist when he's not mean and green.

Whether or not you enjoy the movie, and personally, I think it's hard to hate, one has to admit that The Avengers' success is a game changer. Other studios are likely raising their eyebrows and plotting over how they can also have a cross marketed movie like this one. I know that Warner Brothers is wanting to follow with the DC Comic universe, leading up to an eventual Justice League movie, but they'll need better films than The Green Lantern to get that off the ground. This also means that Joss Whedon might get a big break and be given a blank cheque for a passion project feature, but of course this is all speculative. What's clear is that the Summer movie season is off to an intimidatingly big start and I'm curious to see how the other top films dodge the shadow of The Avengers.