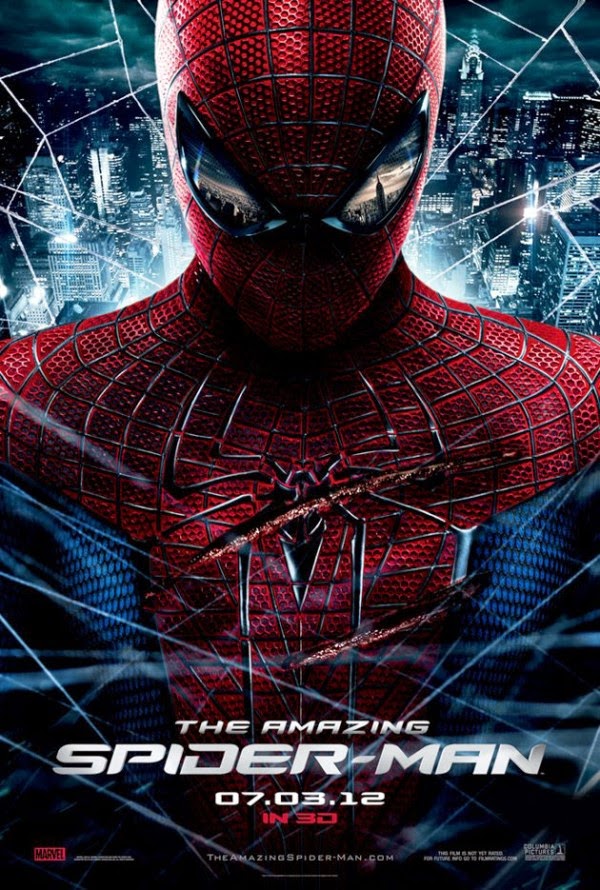 While I was growing up there was no hero I loved more than Spider-Man. I remember my first Spider-Man comic I got from my uncle in the early 90's, where Spider-Man was in Toronto and was after some druggie who did a hit and run putting a kid in the hospital. Ghost Rider was there too. It was in a sub-series of comics that took place in Canada. I had one that took place during the Calgary stampede too. I also remember walking to and from school playing games with my older brother and I was Spider-Man, naturally. He was Batman. I guess at the time we didn't know that they existed in different universes, but that's neither here nor there. Basically, what I'm saying is that I'm a pretty big Spider-Man fan, or Spider-Fan. Some might say that it makes me biased toward this movie, with the idea that I will like it regardless of quality. I don't believe this to be true though. In fact, I think it makes me all the more picky about the Spider-Man movies. I am entirely aware of any change they make to the mythos of character and I have never seen an adaptation that is ideal to me. That being said, I want to try and judge the movie by its merits and not hold it up to the 50 years of Spider-Man history because it really isn't fair. Making an adaptation that is made to appeal to a mass audience is hard, especially with the case of this film, where they are rebooting the series from scratch when the first Spider-Man movie just came out ten years ago and is relatively fresh in most people's minds.

I suppose I should comment briefly about my thoughts about the previous Spider-Man trilogy. I liked them. I enjoyed all three of them, even though I am aware that the third film wound up not being a crowd pleaser; I thought it was over-bashed. I had issues with all of the movies to some extent or another, but I never hated them. Just like Sam Raimi's films, there were aspects of The Amazing Spider-Man that I enjoyed and other parts that I didn't.

The story goes through some familiar motions... young Peter Parker (Andrew Garfield) is being raised by his Aunt May (Sally Field) and Uncle Ben (Martin Sheen) after his parents mysteriously disappeared when he was a boy. In high school he's a nerd who gets picked on because he's skinny and smart. After stumbling upon his father's old briefcase, he follows a picture to Dr. Kurt Connors (Rhys Ifans), who works for Oscorp. When wandering into a room in Oscorp, he gets bitten by a genetically modified spider in Connor's research lab and begins to gain some powers like sticking to buildings with his fingers and having a sense that gives him super fast reflexes. And then Kurt Connors tries out a regenerative serum on himself to bring back his missing arm... but guess what? It has some very unsightly side effects.

The things that worked well for me in this film were the characters. I think Andrew Garfield is a better match for Peter Parker than Tobey Maguire was. He fits right into the role with a natural awkward charm that is very reflective of the Parker in the comics. I also really appreciate that they strayed away from the obvious choice of having Mary Jane Watson as the love interest and go for the more risky character choice of Gwen Stacy. Fans of the comics know why that is a less comfortable decision. But it's great to see them develop this character because I think that she is crucial in setting up who Peter Parker becomes later in his career as Spider-Man. It's also great to see her play a bigger part in the third act of the film than just being the love who is in peril. They avoid that cliché and rightfully so. Save that for later... if you know what I mean. There is no Mary Jane in this movie and I think that's a good thing. In fact, there are a lot of side characters that don't appear in this film, including Harry Osborn, J. Jonah Jameson and a few others. I don't mind this because the movie does seem to be a set up for more films, as is to be expected. I don't mind taking time for the characters to be revealed.

I like that they used The Lizard as a villain, but I wasn't too sold on the design of the character. Although not overly distant from the very first appearance of The Lizard in the comics, I prefer many of the more modern representations of the character, which has a more predominant snout and looks more beast like. This one still looked a little too human. Spider-Man on the other hand was handled very well. His agility and fighting style are very true to the character and is often very fun to watch. He's a little more animated looking (in a good way) and does a bit more of that witty banter that he's so well known for. I like this film's take on his powers more as well. I like that he has his synthetic web shooters and I enjoy how they show his spider sense a lot more.

Sadly, I don't think that The Amazing Spider-Man lives up to its promise and is actually amazing. More specifically, it's too uneven. The last half is actually very good and balances its action and heart really well. I was really invested in his confrontations with The Lizard, once he finally showed up. But the first half of the movie doesn't always work, and even treads on being boring at times. Not good for one of the year's biggest blockbusters. I like that they took their time to set the characters and villain up, but the problem was that they focused on some of the wrong things. There was probably too much of Parker's social life problems when they should have been building up the two most important things: his getting to know Gwen Stacy and his relationship with Uncle Ben. The former they worked on, though arguably not quite enough. The latter was not set up properly at all, so when the inevitable focal point of Spider-Man, the Uncle Ben story, happens, the emotional impact isn't there and so the radical action of Parker becoming a super hero doesn't quite feel justified. That is the biggest flaw of the film and it's a hard one to overlook.

I did enjoy the film for the most part and would like to see the sequel, but I would recommend the Sam Raimi films over this one. Though it is entertaining, I feel that it isn't quite satisfying as its own movie. I'm more excited for what the story could potentially shape into. There is so much unexplored territory, but much is alluded to. I still don't feel like the ideal Spider-Man film has been made, but one day it might be. For now, this one is satisfactory.