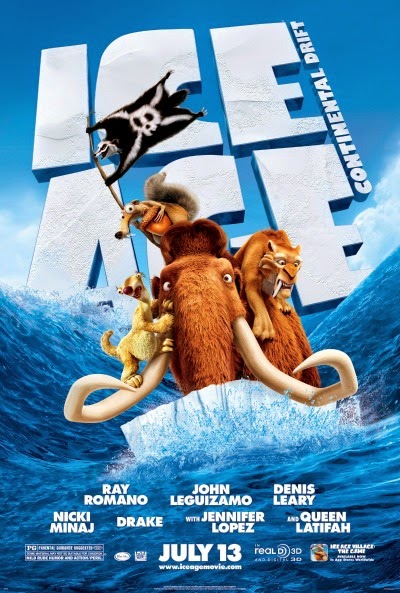 When I first saw Ice Age back in 2002, I would never have guess that 10 years down the road, we'd be on the 4th instalment of the series. Apparently everybody loved these movies and I didn't know it. The third film is even in the list of the top 10 highest grossing animated movies list, which was a surprise to me, though with that knowledge it is no surprise that there they have made a fourth. I guess it makes sense, since this is Blue Sky Studios' bread and butter and their only main franchise that can compete with the likes of Pixar and Dreamworks, even though their movie Rio was a big hit last year too, apparently. I'm glad that another studio is in the race though; it makes for a more even playing field.

I watched the first two Ice Age movies, only once and I remember moderately enjoying them, though most details about them are a little distant. The third one I didn't see. Watching the fourth one didn't feel that difficult, so at least the stories are self contained enough that you don't really need to see them to be up to date. Mostly you just have to figure out which characters are new and when they were introduced. Apart from that, there were only a couple of references to the third movie, which is fine.

Ice Age: Continental Drift follows Manny (Ray Romano), Sid (John Leguizamo), and Diego (Denis Leary) as they get a visit from Sid's family who drop off their old Granny (Wanda Sykes) to leave her with Sid. Meanwhile, our old furry friend Scrat is trying to plant his acorn and through a series of events that defy everything everyone knows about the laws of physics, he breaks the continents and has them drift apart. This disrupts Manny's father/daughter time in that he gets trapped on a chunk of ice with Sid and Diego, that starts floating away from the mainland. He promises to meet his family, but on the open seas there are many dangers awaiting our three heroes, including blood thirsty pirates.

Every time I turn there are more characters in these Ice Age movies. Say what you will about the Madagascar movies, at least they kept the primary characters in focus for all three movies. Ice Age is trying so hard to give them all screen time that the movie is spread a little too thin. It seemed to me that the trio of the first movie were strong together and were able to carry the movie, but now with every movie we feel the weight of everyone else, not all of whom are particularly well developed. I don't mind that Manny and Ellie (Queen Latifah) are having a family and their teenaged daughter Peaches (Keke Palmer) is not a bad character. I suppose I just don't like her sub plot. She likes a boy and they don't like her friends so she pretends she's not his friend and bla bla bla. It's heavy handed, trite beyond belief, and just not entertaining.

Doesn't help that the “popular kids” are super flat stereotypes. Yes, apparently Mammoths had a popular crowd too. You know, I don't remember the issues of the first movie being so blatantly modern. If I recall, Manny's big inner turmoil came from the fact that his species was extinct. Now, we're basically watching a high school drama with fuzzy creatures. Makes me wish that those Mammoths stayed extinct. Doesn't help that these characters are portrayed by pop artists Drake and Nicki Minaj. Actually, that's a problem unto itself.

The casting of Drake and Nicki Minaj is a symptom of something that seems to be a growing issue in a lot of Hollywood films and it's a trend that I do not like. You can tell that Denis Leary was cast as Diego because he has a deep masculine voice. Ray Romano was cast as Manny because he has a large voice with a comedic touch to it. John Leguizamo had a slurred funny voice that he could provide for Sid, the comic relief. These actors were cast because of their sound and abilities. They had something to offer these roles and it worked very well. Drake and Nicki Minaj are not good voice actors and it shows. When you hear them, you can just sort of tell that they're a cut under everyone else because it just sounds like they're speaking their lines. They aren't adding anything. At all. And what is more strange is that they apparently both have an acting background. Perhaps their move into being singers was to spare them their inevitable failure as actors. But back to my point... the fact is that these characters served very little purpose and had very little personality, especially Minaj's character. So, why are they even in this movie? Because someone thought that they might be able to make a little bit of extra money through them and they had enough power to say that it would be so. And I've found myself strangely offended by this notion. With all of the countless talented voice actors out there competing for the parts in the movie, here we have a role that is pointlessly inserted for someone who has no right being in a movie like this. It's disgraceful. I mean, Katy Perry was awful in The Smurfs last year, but at least Smurfette was a big part of the film... she may have been pointless also, but so was that whole movie.

Even some of the characters that were previously in other movies seemed superfluous most of the time. Crash and Eddie, who debuted in the second film have little more than a few lines. Similarly, Sid's Granny, despite being a new character, is clearly just there for the laughs and doesn't contribute all that much to the plot. I think there are just too many characters in this for the story that they have. That being said, I don't think that the main plot is a bad one. I like the pirates and I like Diego's stake in the story. They were smart to keep it simple where it needed to be at times. If only that were consistent.

I imagine that kids will enjoy Ice Age: Continental Drift and that parents will also be able to sit through it. I wasn't bored and I laughed a few times so you could have a worse time at the movies. That being said, it's becoming more and more clear that, just like in the film itself, the Ice Age is melting away.

Also, what's up with those little animal natives? Anyone else notice that they're pretty much just Ewoks?! I was not expecting to see Ewoks.