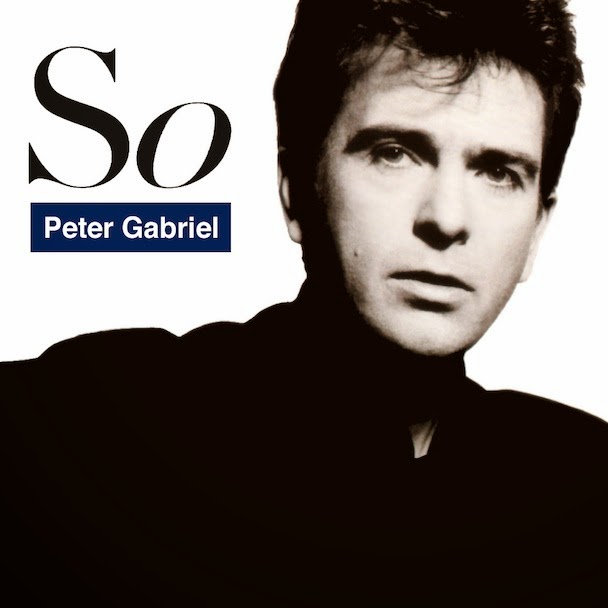 Peter Gabriel has been one of the most creative and innovative figures in the music industry since the early 1970's when he was one of the founding members of progressive rock band Genesis. In 1975 he left Genesis for a number of reasons and pursued a solo career. He released four studio albums in the late 70's and early 80's, but things changed when in 1986 he released his most popular album So. I decided to review this album on a whim because I was listening to it and felt that I had a lot to say on it. Also, there happens to be a recent re-release as a 25th Anniversary edition so why not reflect a bit on the album and how it has endured over the years?

When I first heard So I wasn't very impressed. I liked the radio hits, but not much else caught my interest. I don't know why I kept coming back to it, but I did and it started to grow on me in a big way. It was one of those cases where track by track you realize that you like more songs than you don't. This isn't to say that this is a perfect album or even Peter Gabriel's best album, but one can certainly see why it has left an impression on pop culture. Gabriel's work has always varied, but that issue is really encapsulated in So. For all that it has to offer, one might argue that it's too ambitious for its run time and at times focuses on the weaker qualities of his music. It makes for a very imbalanced experience, but worth it for the rewards.

It opens with “Red Rain,” a killer of an opening track, filled with passion and confidence. It draws your attention with a terrific rhythm section, with the prolific player Tony Levin on bass, lending his talents to Gabriel's music as he did for all of his albums. What's great about this song is how well the pieces fit together. It's difficult to explain, but it can be at times difficult to pick out the different instruments and sections because of how well they are pieced together. There is a definite 80's stamp on the song, but in a good way. It's a promising start to the album.

It's followed by “Sledgehammer” which has a much more shameless 80's sound to it. I will certainly say that it is a fun song and an understandable hit for the era. The song is still well known for its music video which had groundbreaking effects when it came out. It's still an impressive display of artistic wizardry. It's curious, now that I have some more context of where Gabriel came from, that an innovative progressive musician such as he would create such a shameless pop hit like this, but its hard to argue with the results.

“Don't Give Up” is a duet sung with Kate Bush. How much I enjoy this track really depends on my mood. Sometimes I find it strangely boring, while other times I've grown to appreciate its tenderness. A lot of what works is Kate Bush's vocal contribution, which is really beautiful. I didn't like this song at all for a long time, but there is a genuine uplifting nature in it that can be encouraging at times. It's not my favourite, but I know it's a very moving song for a lot of people so the problem is likely with me. I do believe it's a bit too long though.

Well into the middle of the album we have “That Voice Again,” a somewhat uneven song with a strong chorus and relatively uninteresting verse section, but I think that works in the favour of the song overall as it helps amplify the better parts of the music. I enjoy it quite a bit.

“Mercy Street” is not a song I enjoy very much, and like “Don't Give Up” it is an uncomfortably long track. It's not horrible I suppose, it's just uneventful and lacks any significant hook to draw me in. And then it jumps right into “Big Time” which is a little jarring to be honest. It goes from one of the most subdued songs (probably ever) into a jumping 80's pop hit with heavy synthesizers and thumping bass. This song is very similar in tone to “Sledgehammer” and basically feels like a follow-up single. It's not one I love, but it's a fun track. It definitely lacks a subtle touch in the lyrical department, but it does what it supposed to I suppose.

After that the album takes a bit more of an artistic turn. “We Do What We're Told (Milgram's 37)” is a fascinating dark track, lead by eerie synthesizers and piano with very little vocal contribution until the very end. It's a real mood setter and feels like a truly unique entity. I really enjoy it. Then comes “This is the Picture (Excellent Birds)” which is a strange, groovy art piece. This is another track that grew on me quite a bit. There is something about the unusually synthetic synth sound used in it that reminds me of old video games, but also holds an element of mystery to it. In many releases of the album, this is the final track.

I bought the remastered version of the album in which “In Your Eyes” was moved from the fifth track to the final track. This was apparently what Peter Gabriel originally wanted so all versions will have it like this from this point forward. I decided to review it like this because it actually works a little better for me as well. And I can't express my love for “In Your Eyes” enough. I believe that it is the single best love song ever written, full of honesty and a truly earnest sorrow. It's one of his most famous songs and still gets occasional radio play, and I think that it's because it really captures what Gabriel is able to do right when he makes pop music. It's quite simple in construct, but delivers because it is accessible, memorable and honest.

So is an album that I find quite fascinating and feel compelled to revisit often, even if I feel that overall it is imperfect and could be so much better. Mostly the issue is that it is really inconsistent, at times delivering flamboyant pop hits, at other times passionate ballads. But sometimes I find myself drawn to albums that have clear imperfections. In some ways it is more transparent and you can see the artist more clearly. The ideas and ambition of the project are more obvious. I sometimes wonder if So would have benefited from some additional songs, maybe just one or two more, because at times it feels like it could have accomplished more than it does. Then again, at the time the album was in the age of vinyl and so it had to play within the confides of that medium.

This is a classic 80's album by many critics standards and I would agree that it has some absolutely brilliant moments. Peter Gabriel in general is a talent that I never get bored of and my respect for him and his music only grows with time. At times So is a bit dated, but for the most part the spirit of his music endures.