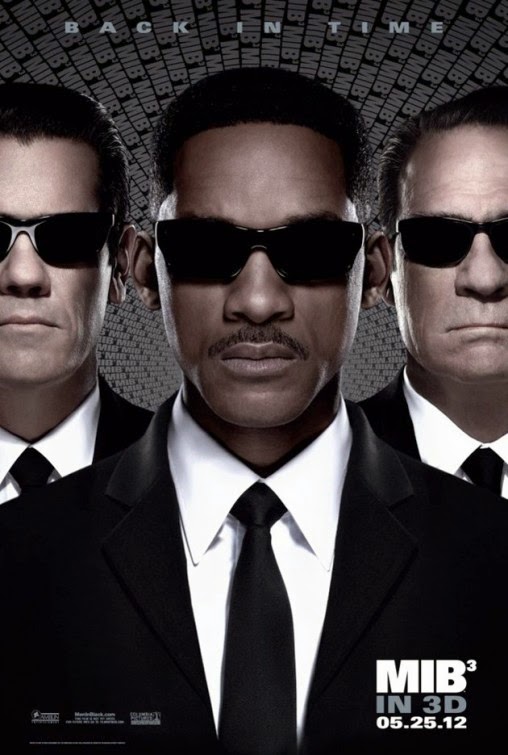 The first Men In Black movie came out when I was 11 years old and instantly became one of my favourite movies. It was action packed, creative, hilarious, and just the right amount of disgusting to keep my pre-teen self engaged and entertained. I just loved it. Then, five years later they made a sequel that... well, I might not be the only one to say that it disappointed on a few levels. Nevertheless, the film was successful financially and I heard rumours of a Men in Black 3 for a long time. But... it didn't happen. After the first Men In Black film, Will Smith was pretty much a box office winning guarantee, having the most amount of #1 films in a row, all of which made hundreds of millions of dollars. Then, after three movies in less than two years, I Am Legend, Hancock, and Seven Pounds, he took a leave of absence from big screen. In that time he was focusing on launching the careers of his kids, producing movies like The Karate Kid which starred his son Jaden Smith. And apparently Willow Smith has a music career, but I don't know much beyond the much hated single “Whip My Hair.” The less said about that, the better.

With other matters taken care of, Will Smith is returning to the big screen to reign supreme again. Of course, with an absence for so many years, it's no wonder that his big move back is into the franchise that he's still so well known for. There we numerous delays making Men In Black 3 and some of them have fingers pointing to Will Smith as he was demanding rewrites to the script even into the shoot. Some call this an ego trip, but I'm not so sure myself. Personally, I believe that one of the biggest problems with the second MIB movie was the story and the pacing, which is pretty big and an issue with the script. I think he probably detected the same deficiencies and wanted to make sure that this was a better sequel. After all, two dud sequels pretty much closes the door on potentially furthering the franchise. Fool us once, shame on you...

Men In Black 3 starts with Boris The Animal (Jemaine Clement) breaking from a prison on the moon with a vendetta against Agent K (Tommy Lee Jones) who blasted off his arm and locked him up back in the late 60's. Boris the Animal's plan is to go back in time to help himself kill K before his arm was blasted off and he was arrested. So, Agent J (Will Smith) wakes up one morning to find that no one knows who Agent K is except for Agent O (Emma Thompson), who knew him when he died back in 1969. They discover that history has been changed so J has to go back in time to help K survive and restore history back to its normal state.

I can this much for sure about Men in Black 3, it is certainly is a stronger film than Men In Black 2. But on the other hand, it's been ten years since the last MIB movie, so I have to admit that this one does seem a bit underwhelming considering it should be a big event both in terms of the story and the significance of what this is supposed to do for the franchise. Though, perhaps that's a good thing. Men In Black 3 doesn't feel forced or over dramatized. It feels really eased into, like the actors haven't been out of character for those ten years. I suppose Agent J isn't a huge stretch for Will Smith to play, but it shows his charm and quick sense of humour are still ever present.

I'm sure if there is one thing that you've heard about the movie, it's that Josh Brolin, who plays the young Agent K, does an amazing Tommy Lee Jones. And it is a great performance to remember. So good that I'm willing to forgive that he's supposed to play a 29 year old and he is and looks 15 years older than that. Even though it's poked fun at in the film, it's still pretty tough to ignore.

What I appreciate about this film is how it seemed to learn from the mistakes of the second movie. MIB 2 made a fatal mistake that many sequels do; it took all the elements that people seemed to like about the first film and tried to play off of those, essentially killing the joke. It incorporated Frankie, the alien pug after people liked that character in his single scene in the first movie. It also played off of the skinny stick aliens that appeared in the first movie, giving them a whole subplot. It was entirely unnecessary and basically made it so the characters were no longer very funny. Men In Black 3 is much smarter that that and allows it to be its own movie. The focus is much more on the leads, Agents J and K, and that's the way it should be. It lets the secondary characters be secondary and allows for new developments and reveals about the two guys that we've come to love.

I do wish we got a chance to see them play around with the time period a bit more. We're given a chance to see what happens when Will Smith travels back to 1969 and brings back technology from the future. I don't think that the time travel element and cultural differences were played up as much as they could have been. There were moments where it was touched on, like when they met Andy Warhol, not to mention that the first trip to the moon played a big part in it, but I think that it still it could have taken place at a later date and the story wouldn't have been affected too heavily. In fact, that might have worked out some of the strange age issues in the movie. Oh well. I guess I like time travel culture shock stories, like the first Austin Powers and, of course, Back to the Future. I didn't feel like J needed to adapt all that much.

I don't know why, but I just don't think that they can make a Men In Black film as good as the first one. It just seemed like one of those cases where the wonder and excitement of it was something fresh and new that movie goers needed at the time. The kind of mystery and reveal can't happen again simply because we've already become part of that world. So, the best we can get is an exploration of that world from a different point of view and I think that's what this movie provides us. It can't be as fresh as the first movie, but it does have fun with expanding the world. The thing is, this doesn't really feel like an ending to the series at all. It doesn't leave one with the sense of satisfaction that one should get when a trilogy is completed; it felt more like an episode of a series. I don't know if this means that we should expect a Men In Black 4, or if they just didn't know how to give it that finishing punch.