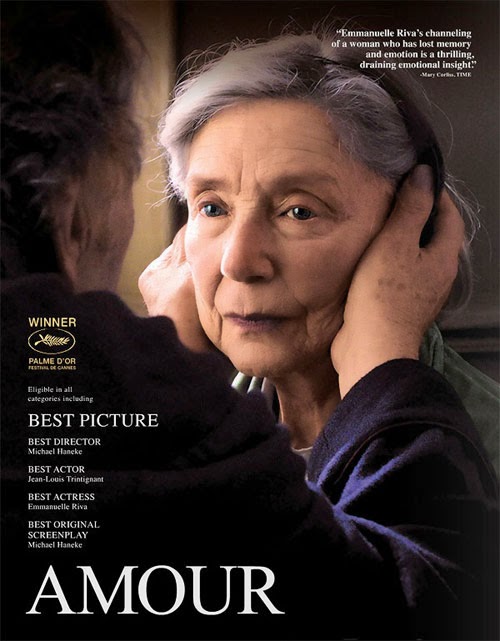 This relatively unknown film from France suddenly came into the limelight when out of nowhere it was brought into public attention with multiple Oscar nominations including best actress, best director, and best picture. The best picture nod does mean it is pretty much guaranteed the win for best foreign language film as well. No small feat for a little film about a couple getting old. Well, that over simplifies it. Amour follows elderly couple Anne (Emmanuelle Riva) and Georges (Jean-Louis Trintignant), who live a cozy and humble life with one another that is shattered when one day Anne has a stroke. A visit to the hospital leads to a surgery that not only fails to succeed at unblocking the artery, but leaves Anne with half of her body paralysed. Now, her condition can only worsen as time goes by, her physical demands growing faster than Georges is capable of adapting to, especially at his old age.

I can understand the Academy's infatuation with this movie as it is a very poignant work. Overall it's very humble, but full of jarringly emotional moments and two very earnest performances from the lead actors who carry the film on their backs. Both quite seasoned actors, having been working since the 1950's, it's great that there are still challenging and compelling roles for them to take. Emmanuelle Riva puts on an amazing performance and it's very understandable that she was nominated for the award for best actress, making her the oldest actress to get a nod for the award at 85 years old. Seeing her in the various states of her degradation is like getting a glimpse into real life. It sure makes getting old a very scary prospect. Trintignant also gives a heartbreaking performance and allows us to journey with him through this struggle. He is essential to us understanding the emotional centre of the film because, unless you've had a life altering physical experience like Anne, we can only see the events through his eyes.

The film's direction is very understated, relying on simple long shots to allow the actors the time to speak their dialogue. There aren't really any technical feats that the movie can boast, but to do so would be counter productive because the whole movie should focus on the characters and their relationship. Sometimes a still camera is what is needed and that sort of restraint is what Amour needed. That's another charm to this film, it's the kind of movie that seems relatively simple to make, but is remarkably successful because it just tries to tell the story well. It gives the actors the space to act and takes the time to let the audience take in the atmosphere. Austrian writer and director Michael Haneke makes movies with a lot of awards and nominations behind their belts, Amour with the most of all, and I imagine that it is because he understands the fundamentals of story telling and allows nuance into his pictures which might seems stylistically uninventive to a blockbuster fed North American audience, but I think that if more film makers made films that do the basics as well as this movie does, perhaps we could rely on more quality blockbusters more often.

It is clealy a movie made on a humble budget and the Haneke's script is clever to keep the majority of the action within Anne and Georges' home. We don't see their trip to the hospital or any of Anne's surgery, but a lot of what happens is discussed with visitors, including their daughter Eva (Isabelle Huppert) who enters the story on occasion only to get more frustrated at the circumstances. In a lot of ways the film could work as a dramatic stage play, after all, much of it is dialogue driven in a contained set. It also feels like a play at times because the movie actually has no musical score; it is without any music except for bits that are actually played within the story. Not even the credits have any music.

Amour or Love, really is the ideal title of this film. Many talk about love in its beautiful and romantic context, particularly in the month of February when young couples try and do wonderful things for one another to win favour and all that. This film challenges that notion in a very realistic fashion. The kind of love that we all actually hope to achieve, the love that Anne and Georges have, is so beautiful that it hurts to watch. It is the complete selfless sort of love that not everyone is capable of or even gets to attempt it in their life time. To cuddle, be cute and have sex is all well and good, but to sit there and take care of your life long lover as they slowly die in front of you is a love that I'm afraid of facing, as I'm sure many people my age are. But perhaps that is why this movie is so effective. It is a reality that any one of us could face in say, 60 years time.

Check it out. It's the feel good movie of the year.