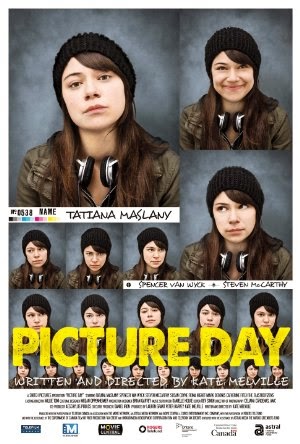 Some time ago I got a chance to see Picture Day, a Canadian film at the Vancity Theatre here in Vancouver. It's a theatre that specializes in festival cinema rather than mainstream films. What drew me to this film was the lead actress is Tatiana Maslany, who I knew quite a few years ago through improv theatre circles, though admittedly not too well, though we had some good conversations together. I knew her younger brother better. Geez, I guess that was about ten years ago now. Well, it's been really fun seeing some of my old acting peers' careers grow, and Tatiana's has been quite noteworthy as she even had a secondary role in the hit Valentine's Day movie, The Vow. And now her career is booming with the lead role in the series Orphan Black.

While Maslany has been a success in independent films for some time now, this is the directorial debut of Kate Miles Melville, who has been involved more in Canadian Television, writing for shows like Degrassi: The Next Generation and Being Erica. But Picture Day does show that she has the vision for cinema and can make the transition well, at least with low budget pictures such as this.

The film follows Claire (Tatiana Maslany), a late teen who is still in high school after being held back a year, She should have graduated, but skipped too many classes and got suspended too many times. She bumps into Henry (Spencer Van Wyck) a younger student who Claire used to babysit when he was a kid. They become friends again, but the truth is that Heney has had feelings for Claire since he was a kid and them finding one another again reignites those feelings. However, Claire has a spark elsewhere with Jim (Stephen McCarthy) who she met at a show of his band The Electrocitizens, which are a real Toronto based band.

Picture Day makes an interesting character portrait of an adult youth. Claire is in that awkward space between adolescent and adult, and the two men who have entered it, or re-entered, represent the opposing forces. Claire tries to bring Henry up to speed at school and get him some friends as well as a girl friend by moulding him in a sense; she changes his style, hair colour and gives him a fake back story. This works on a superficial level, which only mildly interests Henry. Her relationship with Jim is quite different as she attempts to become a part of the rehearsing and touring band life, in a way trying to change herself to accommodate him. She doesn't really fit in there, and she doesn't fit in well at school particularly either as she still gets in fights and is lost when it comes to math. Henry is the only one there who seems to give her positive attention. It's an interesting contrast to have him accept her fully for who she is while she changes his identity radically before his eyes.

Tatiana rises to the occasion to give Claire a lot of depth and a natural likability despite her questionable actions. In a sense, she is an anti-hero on a small scale. She is deeply troubled, but tries to help Henry find his footing in his social life... tries anyway. I must confess that Maslany is a little too naturally pretty and not as unkempt as I might see this character, but she plays it very well. And to counter my own point, she looks very neutral in dress and appearance, as if to reflect her median place in life. Perhaps heavy piercings or a grunge dress would have tilted her character too much one way or another.

Despite interesting characters and fairly strong performances, I didn't find myself enjoying Picture Day as much as I felt I should have. I think that the story was quite personal to the film maker, but not as interesting as one might hope as an audience member. It goes through some familiar movements. And there is a definite pattern with young adult and teenaged coming of age stories where they feel that the protagonist must have a lot of sex before discovering herself and her place in life. I suppose that might be true for some, but I honestly think that there can be more creative ways for people to find themselves. I suppose that's the problem, I couldn't really see much of myself in this character. There wasn't something I could connect to. Or if there was, it was much more with Henry than Claire. I was a bit of an outcast in school, though I didn't keep shoe boxes of memorabilia in my closet. He was fascinating to watch, but I guess I found myself frustrated when the film took the focus away from him and his interesting relationship with Claire. Her story with Jim is nowhere near as engaging, but I guess it gives that necessary contrast.

Whatever the case, it is a well made and thought out film and I'm glad I came out to support it. Picture Day played at several festivals including the Toronto International Film Festival where it won a couple of awards. And it may be getting a limited release soon, so if you're a fan of coming of age stories or classier teen dramas, you should come out to support some Canadian cinema.