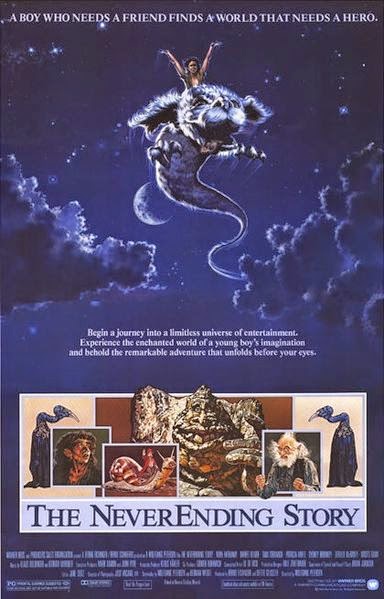 There were movies that I watched while growing up and then there are movies that I grew up with and The NeverEnding Story was one of the latter. It was with me for as long as I can remember. My family and I used to watch the VHS copy that my grandma owned many of the times that we visited. I still remember my fascination with the opening title sequence as that catchy title song started playing and we were shown visuals of mysterious clouds. As it was released just two years before I was born, there was never a time when I didn't know The NeverEnding Story. But I do believe that I can give a fairly objective review and I will share with you some of the things that worked well for me as a kid and what still works well for me as an adult.

The film follows Basian (Barret Oliver), a young boy whose mother recently passed away. His grades are starting to slip as he is daydreaming in class and to and from school he is being harassed by bullies. While avoiding the bullies, he hides in a book store and meets Mr. Koreander (Thomas Hill), the somewhat grouchy store owner who warns young Bastian away from a mysterious book. Bastian, being the curious sort that he is, takes the book when Koreander isn't looking, promising to return it. This run in with bullies and meeting in the store have made him late for school and a math test so he hides in the school's attic and starts to read the book, which starts to become a little more involving than he expected. The fantasy world of Fantasia is in great danger as there is a dark void that they call “The Nothing” which is consuming everything in its path. All the creatures are journeying to the Ivory Tower to seek help from the childlike Empress (Tami Stronach) who rules over the land. But she is deathly sick and has called for the warrior from the plains Atreyu (Noah Hathaway), who is just a young boy. He must seek a cure for the Empress with no clues as to where to go or what to do. He of course takes the challenge.

One of the dangers of revisiting movies from one's childhood are that often we are not as accepting of technical faults of the past. When films were made in the 80's, we disregard the special effects for being dated and cheesy. But truthfully, I like a lot of special effects from that time because of the technical limitations. I think they've aged better than some of the films from the early 90's which used new CG, which by today's standards looks horrible. Most of the special effects in The NeverEnding Story hold up pretty well. Just the occasional blue screen flying sequence doesn't work that well. Even then, it's forgivable. Practical effects tend to age a whole lot better because there is something real to look at and the work and ingenuity used to make Fantasia come to life is quite admirable.

But how well Fantasia is made doesn't mean that much if the audience doesn't connect with the story. Effects don't and never have made film. But the movie is very bold and doesn't talk down to the child audience. It has moments that lighten the movie up to keep it from being too adult, but there are some really scary and heart breaking scenes. I remember my young self being absolutely terrified by the Gmork, an evil wolf-like creature that is tracking down Atreyu to kill him. Even now I think it's a very scary character design and is used sparingly which hides some of the animatronic limitations, which also creates a lot of suspense as a result. Same deal with Jaws. You didn't see the shark very much because of the limitations, but that also made the movie much scarier. As for the sad emotional scenes, I'm not going to give it away, but everyone who has seen the movie already knows what I'm referring to. Let's just say that there is a part that used to make me cry in the Swamp of Sadness scene... and it still almost does. I might have lost it if I didn't know it was coming.

Another interesting thing about this movie is that it's the only kids film by Wolfgang Peterson, famed mostly for directing the famous epic German film, 1981's Das Boot. Now, I haven't seen Das Boot or most of the films that Peterson has been given acclaim for, but rather, I've seen some of his very recent duds, such as Poseidon and The Perfect Storm, which haven't inspired me to check out his other work. So, imagine my surprise when recently I look at one of my childhood favourites with his name on it. It instills some faith in his work and I really should look into some of his other movies.

The weight of the movie is in the hands of the lead performers, which is risky because the main characters are all children. Barret Oliver is very earnest and tries very hard, but at times his performance is a little bit cheesy. It doesn't damage the movie though as most of the time he does just fine. More of the film rests on Noah Hathaway who does a wonderful performance as Atreyu and is able to reach the emotional heights that his journey demanded... especially in that Swamp of Sadness scene, if you know what I'm saying. He is charming and likeable and gives off a feel of maturity, while still having the vulnerabilities of a child.

I never understood the title of The NeverEnding Story for the longest time and only recently figured it out. The film is based off of the book of the same name by German writer Michael Ende. And obviously the story has a beginning, middle and end, so the name doesn't make any sense from that standpoint. However, if you think about it as a book, you see that Bastian is reading The Neverending Story in the book, and the reader is reading about him reading. Atreyu and Bastian are both unaware that they are characters of fiction though they are on different layers of the story. Thus, there is an implication that perhaps we are also part of a story in that someone is also reading. Don't think of it as a story from start to finish, but rather one that stacks on top of the other. It's like Inception, but with literature instead of dreams.

I think you would be hard pressed to find children's movies that are this imaginative, mature and daring. While there are some great family films still coming out (and not all of them are by Pixar), there are very few that are so decidedly dark. But I think that kids don't mind being scared. Sure, I would hide whenever the Gmork came onto the screen, but I was all the more invested in the film. To have emotional realities in a safe realm of fantasy is what we crave from story telling. It's the long withstanding tradition in humanity and The NeverEnding Story takes that base desire and plays with the idea that maybe it's not as safe as you might think. But of course, it is. Right?