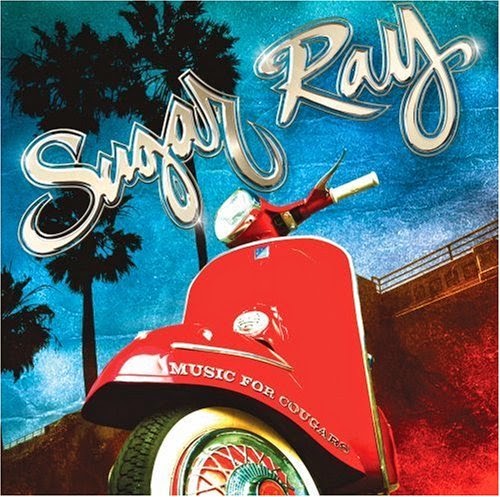 Remember Sugar Ray? I was a casual fan of their work back when they were releasing hits. They rose to popularity in the late 90's and maintained it through the early 2000's. After their 2003 album, there was a long break and nothing was heard from them until 2009 when they released Music For Cougars. And... it was not a successful album, especially compared to when they were a big act. And there are a few reasons for that. It seems like it was Sugar Ray trying to be popular again. The key word there is trying. The album is a prime example of a band selling out to appeal to a mass audience, only in this case, it didn't work. While one could see it as a case of a band trying to adapt to a different music market, it really seems like they should have thought this move out a little more. As it is, they fall into every cliché in the book... so much so that it seems like the album is a complete joke.

To be fair, I don't expect a band to sound the same as they do through their whole careers. Just as people change and grow up, bands must also. Their sound finally seemed fully fleshed out in their big hit album 14:59, but that was ten years earlier. Before that, their album Floored was borderline metal. I wouldn't and shouldn't expect them to sound like they did then because then all I'd be wanting is a nostalgia trip and not a new album. If I want a nostalgia trip, I'll just listen to 14:59 again. However, the inherent problem with Music For Cougars is that it doesn't sound like Sugar Ray have developed their own sound so much as they have absorbed everyone else's music... but like, all the bad music. To their credit, some of the songs are catchy. That being said, it's the kind of catchy where you regret having heard it in the first place.

I should explain. Sugar Ray had a cool style which was primarily rock music, but had elements of reggae and funk. It was fun, accessible and it sounded pretty distinct, especially put up against Mark McGrath's grainy, sombre voice. And now, they have a lazy pop sound and the once raw sounding McGrath even goes as far as to autotune his voice. That seems to ruin much of the charm of their sound. And it's not even autotuned to the point where it's a style. It really just sounds like a sloppy job to fix his pitch. It seems like the kind of tool that should either be a prominent sound or completely invisible.

Their mashing of genres is not what it used to be. This time we're given a glossy pop sound which doesn't service their music well at all. On songs like “When We Were Young” and “Love 101” we are unfortunately forced into pop-country territory which is a genre I never want to stumble in. They still touch on some of their reggae influenced sound in songs like “Morning Sun.” In fact, that song had the most potential and is closest to having their old sound, but the autotune and over production makes it feel all wrong. It's like their polishing a genre that demands something more raw. Perhaps if they want to dabble in these genres, they shouldn't be giving in so shamelessly to the clichés of modern pop music. Again, I don't mind them changing their musical direction, but at least do something original.

As far as clichés go, nothing stands out as much as the lyrics. “Rainbow” is a tough track to get through, full of cheap metaphorical sentiments about getting over the bad times and bla bla bla. “The sun will burn the clouds away. If you want to see the rainbow, you gotta sit through a little rain.” Aw, how sweet. And in the song “Going Nowhere” the chorus says “Oh, what can I do? Oh what can I say when everything is upside down?” It's just so damn predictable. And even when the words aren't cliché, we're subjected to some unbearably cheesy lyrics. In “Love 101” it's one ridiculous misstep after another. He sings “it ain't always gonna be easy, you might have to work until late, but with a little commitment, given time, I'm sure you'll find, we all will graduate Love 101.” All that plus the country twang just make this track well worth skipping.

This is my official stance: Either quit while you're ahead or wait until you have something worth releasing if you want a comeback. The only good part of my listening to this album is that I've been reminded of their older material. I've revisited many of the songs that I enjoyed of theirs 10 to 15 years ago and it's been very rewarding. Their hits felt like well deserved hits and have aged pretty well. I would recommend them again. It's not that Music For Cougars is outstandingly awful all the time, but it's just remarkably mediocre from a band who had far better days. It has some moderately catchy hooks and some songs that are tolerable, but that's not something I should be saying about this band! We deserve better material than this and so do Sugar Ray. I suspect that a lot of the band wasn't pleased with the direction that they were going in because three of the members left since this album's release. Just as well I suppose. No use the whole crew sinking with the ship.